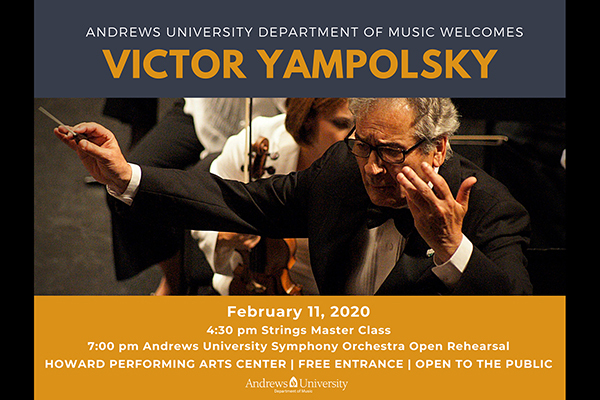 The Andrews University Department of Music will welcome conductor Maestro Victor Yampolsky to campus on Tuesday, Feb. 11, 2020. Maestro Yampolsky will lead a master class for the Department of Music’s string musicians, then shortly after will direct an open rehearsal with the Andrews University Symphony Orchestra. While working with the orchestra during open rehearsal at the Howard Performing Arts Center from 7–9 p.m., Maestro Yampolsky will be amplified. All members of the public are invited to attend and listen.

Yampolsky is connected to Andrews University as he was the primary professor and mentor for the Symphony Orchestra’s current conductor, Chris Wild, throughout Wild’s doctoral studies at Northwestern University in Illinois. Wild notes, “Musicians such as Yampolsky are in rare company, in that he spent significant time studying and working intimately with some of the 20th century’s greatest musicians, studying with violinist David Oistrakh and composer/conductor Leonard Bernstein and collaborating with composer Dmitri Shostakovich while Yampolsky was both assistant concertmaster and assistant conductor of the Moscow Philharmonic Orchestra.”

Maestro Yampolsky was raised in a musical family and eventually found himself pursuing a career in the family trade, studying violin with David Oistrakh at the Moscow Conservatory. After establishing himself as a leader of the Moscow Philharmonic’s violins and also a budding young conductor, he sought an opportunity to emigrate from the Soviet Union to the United States. During his inquiries to secure such an opportunity, he learned that a recommendation from a prestigious American musician might help him secure the necessary documentation for such a move. Yampolsky summoned the courage to approach Leonard Bernstein following a performance that Bernstein conducted at the Vatican in Rome in 1973. A private audition for Bernstein was scheduled in the days following, and within a year Yampolsky was a violinist member of the Boston Symphony Orchestra.

Yampolsky’s proximity to Bernstein continued for years thereafter, as Yampolsky became conductor for the annual summer high school festival orchestra at Tanglewood, while Bernstein conducted Yampolsky and the rest of the Boston Symphony Orchestra’s members next door, also at Tanglewood in western Massachusetts. Eventually, Yampolsky left Boston to pursue a conducting career that included posts as music director of the Omaha Symphony Orchestra, music director of the Peninsula Music Festival and director of orchestras at Northwestern University.

Wild says, “When studying under Maestro Yampolsky, he conveyed to me his conviction that there cannot be any compromise when becoming a conductor. Conductors have a great privilege and responsibility to ensure that a rich heritage of music making is passed along to new listeners without it becoming diminished.” 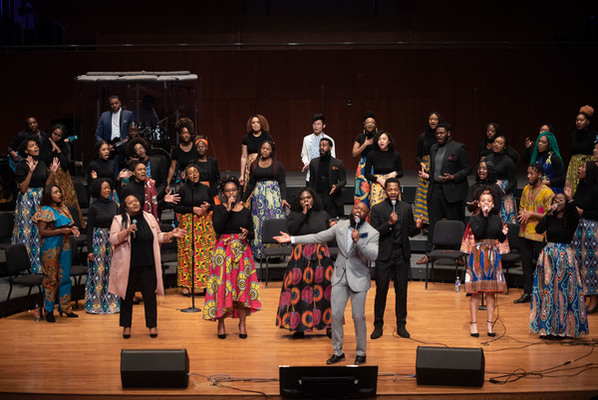