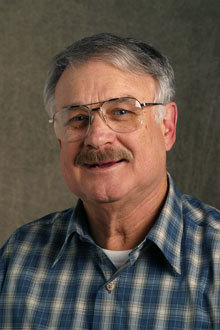 Woodland's PhD is from Iowa State University. As Professor of Botany, he teaches courses in Biodiversity of Vascular Plants, Medical Botany, Biogeography and Environmental Science.

Dennis Woodland grew up during his formative years in the states of Montana and Oregon where he graduated from elementary and high school. His B.A. and M.Sc. were from Walla Walla College in Washington and his PhD in botany was from Iowa State University. He was an Assistant and Associate Professor of Botany at McGill University in Montreal, Quebec, Canada for eight years before coming to Andrews University in 1979 where he is currently Professor of Botany and Curator of the Andrews University Campus Arboretum. He has also given specific requested courses at the Kellogg Biological Station, Michigan State University, Oregon State University, and the University of Wyoming.

Dr. Woodland teaches courses in the areas of environmental science, biogeography, botany and medical botany (a course open to students, the public, and professional community alike--those interested in learning more about the pros and cons of alternative botanical medicine). Every other March (2005) he has taken students to the rain forest of the upper Amazon River of Peru where they spend time with a shaman and explore the tropical rain forest in the course Rain Forest Ecology. In 1998 he did sabbatical research in the National Geographic and NIH funded laboratory of Dr. Walter Lewis, Washington University, in St. Louis in the area of "potential new drugs from the plants of the South American rain forest." His professional research interest has centered around the ugly, nasty, hated, and maligned plants Urtica, called "stinging nettles." He is active in various environmentalist organizations--a past board member of Fernwood Botanical Garden, past President of the Southwestern Chapter of the Michigan Botanical Club, Vice-President, Michigan Botanical Club, and member of the boards of the Hanes Trust Foundation of Kalamazoo, and the Michigan Botanical Foundation.

He has authored several books on environmental science and plant taxonomy including his text Contemporary Plant Systematics, which entered its fourth edition in late 2008. In July 2005 he was a member of the Nomenclature Session of the International Botanical Congress in Vienna where new proposals to modify present rules dealing with naming and classification of plants were voted upon democratically. During the first half of 2006 he was on sabbatical leave to South Africa and New Zealand where he undertook his latest writing project with several New Zealand colleagues: "Plant Families of New Zealand."