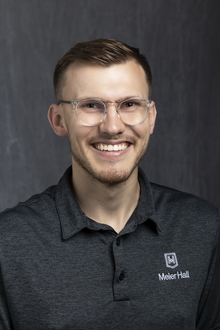 Taylor Bartram graduated from Andrews University in 2017 with his Bachelors in Religion and Communications and is currently working on completing his Masters of Arts in Youth and Young Adult Ministry from the Theological Seminary.

Dean Bartram is Midwest born and raised, growing up in Dayton, Ohio. It was there that he attended Spring Valley Academy, a K-12 Seventh-day Adventist academy. While attending, he and his family made a decision to follow Christ and along with that, to join the Seventh-day Adventist church. He went on to attend Andrews University for degrees in Religion and Communications while being heavily involved in extracurriculars, such playing on the Cardinal basketball team, leading worship for campus ministries, and spending a year as a student missionary. Upon completing his degree, he spent time in hospital and collegiate chaplaincy in Kettering, Ohio. In January of 2021, Taylor took on the role of Assistant Dean at Meier Hall, returning to where he lived as an undergraduate student. In his free time, Taylor loves to play music and lead worship, read a good book, find a new coffee shop, and play basketball.