get ready to act 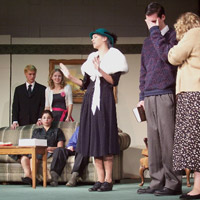 Andrews Academy has a long history in producing plays. Farrell Gilliland II, history and English teacher, began what has become a tradition with his production of Black Elk Speaks and A Man for All Seasons. When these plays were produced thirty years ago or more, students met once or twice a week during the evening and offered two evenings of public performance during the spring quarter. A Man for All Seasons, the first play to be presented in the new Andrews Academy auditorium, played to packed house. When Farrell Gilliland left the Academy in the spring of 1980, producing plays fell into the hands of Thomas Baker.


The first play he produced was Thornton Wilder’s Our Town. For this production, students met in the last period of the day and returned again for evening practice sessions from Saturday night through Thursday night with the two major performances taking place on the Saturday and Sunday evenings before Thanksgiving break.

The Literary Interpretation course is offered in this format every other year. The repertoire has included the following productions:

The intent of the effort and time a production requires is, according to Thomas Baker, to offer students who may not have vocal talent or who may not be athletic giants an opportunity to shine on stage. Baker did not audition students for entrance into the course. He worked with the students who signed up for the experience in any given year. Students learned that they have within them a talent they never knew they had and that they can rise to a level of excellence that surprises them and delights an audience.

Starting in 2017, the school plays have been produced and directed by English teacher, David VanDenburgh.