November 26-30, 2018, was the twelfth annual NHS Cause Week. During National Honor Society Cause Week, NHS officers, members, and guest speakers raise awareness during morning devotions and the assembly program about a specific cause with the aim to make a difference in the world, both globally and locally. “Cause Week” was created by some students from the class of 2008 during the 2006-2007 school year. At the close of the first cause week, one of the individuals shared how his family had lived in their car for a while. After a church took them in and helped them get reestablished, they were able to move to Berrien Springs so he could go to Andrews Academy, and their lives were turned around. Because of this, he had a burden to help his peers become aware of ways they could be involved in helping others. It was such a good and important week that the NHS has continued it since then as an AA tradition. “Each one should use whatever gift he has received to serve others, faithfully administering God’s grace in its various forms” (1 Peter 4:10).

The 2018-19 year’s focus was on the question “Who Is My Neighbor?” NHS members led out in song service, read a scripture each day, and introduced the speaker for the day.

Monday was a snow day! On Tuesday, Jony Haja, who works with Adventist Frontier Missions serving refugee populations in the Middle East, talked about refugees from other countries. He emphasized the fact that these refugees move out of their home countries not by choice, but because they are forced to leave due to situations in their country. If we put ourselves in their shoes, how would that make us feel? What kinds of emotions run through the minds of these refugees? When these people leave their loved ones and the people closest to them, they feel like strangers in the new places they are forced to go to. Jony Haja talked about how Jesus said in the Bible, "Anyone who needs your help is your neighbor." We must apply this to our lives to help those in need, like the refugees seeking peace all around the world.

For Assembly, guest speaker Cathy Knauf, a member of the Michigan Human Trafficking Task Force, The Michigan Women's Commission, SW MI ALPACT, and the founder of the SW Michigan Human Trafficking Task Force serving Berrien, Cass, and Van Buren Counties, spoke about sex trafficking and labor trafficking. She shared various stories about people from all ages and genders that have been trafficked even locally, around parts such as Grand Rapids and other areas of Michigan. She informed the students that there are things like this happening all the time, even if we don't realize it. We can help by seeing signs such as bruises and rope burns on wrists to indicate that the person might possibly be a victim of trafficking. She shared a short video showing just how many people are trafficked. The video emphasized that we do not realize the extent and the damage that trafficking does to the society that we live in. There are thousands of victims from just the western part of Michigan—it was troubling to discover how big of a problem this is. We can make a change today.

Wednesday’s guest speakers, Mikelle Wile and Jharonny Fernandez-Gibbs, are both students in the Andrews University Social Work program, and serve as interns at Bethany Christian Services. They work specifically with immigrant children who have been designated as unaccompanied minors. Mrs. Fernandez-Gibbs shared a heart wrenching story of a girl named Maria who lived in El Salvador and witnessed a gang taking her sister and killing her in a field. Ms. Wile also shared another sad story of another girl who came to America with a human smuggler since her family was being threatened by a gang that would take the girls and torture them in horrific ways. We must be the hands, eyes, and feet of Jesus and help anyone who we meet because you never know their life story until you take the time to listen.

On Thursday, guest speaker Taurus Montgomery spoke about poverty. He began his thought with a testimony about his various mission trips to places such as Ethiopia and India, where poverty is seen quite often. He has witnessed young children begging for money, and he has seen kids with no families to support and provide for them. Sometimes we tend to have the misconception that poverty is only what we see on commercials on television. However, Pastor Taurus reminded the students that this is not the case. Poverty is a mindset that people have. He continued his talk by sharing another testimony about his early life and all of the hardships that he has had to push through. He lived in a harsh environment, and his family had been struggling to provide for him in his early years. Pastor Taurus asked the questions, “What can we do to help the community rise up? How can we impact the community?” He answered these questions by encouraging the students to look at the life of Jesus. Jesus went to people, and He healed them. He could’ve just snapped his fingers and healed everyone, but instead He chose to meet the person face-to-face. Let us strive every day to let Jesus shine through us towards those in our community who might not have what you do and don't take anything for granted.

Friday's guest speaker was Chuck Peck, who presented a service that helps our neighbors here at Andrews University. "Mr. Chuck" volunteers as a Co-Director of God's Abundant Pantry (GAP). GAP's mission statement is as follows: "Serving students today who will serve humanity tomorrow." GAP provides supplemental food to approximately 400 Andrews University International and graduate student families. Mr. Chuck is passionate about helping others. He shared a little history of this service. About forty years ago, an AU business professor noticed some of his graduate students were having difficulty studying and staying awake in class. After dialoging with some, he discovered that they just didn’t have enough money for proper nourishment. So he began collecting food from stores and farmers that would have thrown out produce they could not sell. Of the 400 people they serve, about 45 percent would have gone without food for days during the semester. GAP now has a small building behind the university apartments to distribute the food. GAP is run by volunteers so that 100 percent of the monetary donations goes to feeding our neighbors. Dr. Trickett started this ministry, and in honor of this, the University has named the small forest behind Garland apartments “Trickett’s Thicket.” This is the same forest that biology students have maintained on service days for the past twenty years. Each year they pick up any trash that may have been littered in the forest.

We thank the NHS officers and sponsor, Rebecca Wright, for putting together a very informative, interactive, and interesting week of presentations that encouraged students to better know who our “neighbors” are and how to help. There were difficult but necessary topics discussed, considering the events happening in the world around us. It was a creative week that helped raise awareness and involvement. We pray that each student will continue to be aware of the need of others and be involved in Christian service, not only to help humanity, but also point individuals to Jesus, the true source of fulfillment and healing.

For more pictures from the week, please go to Facebook. 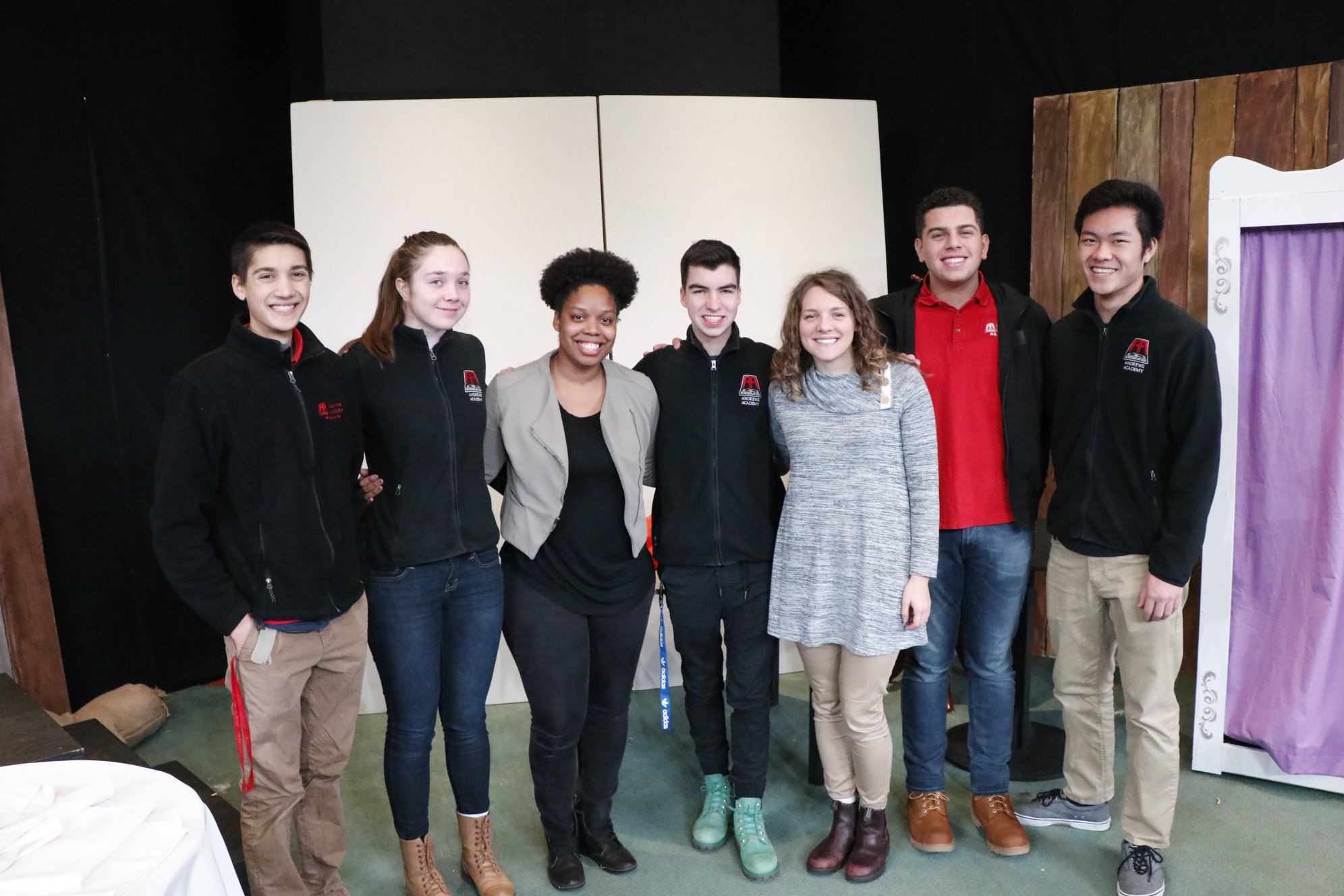 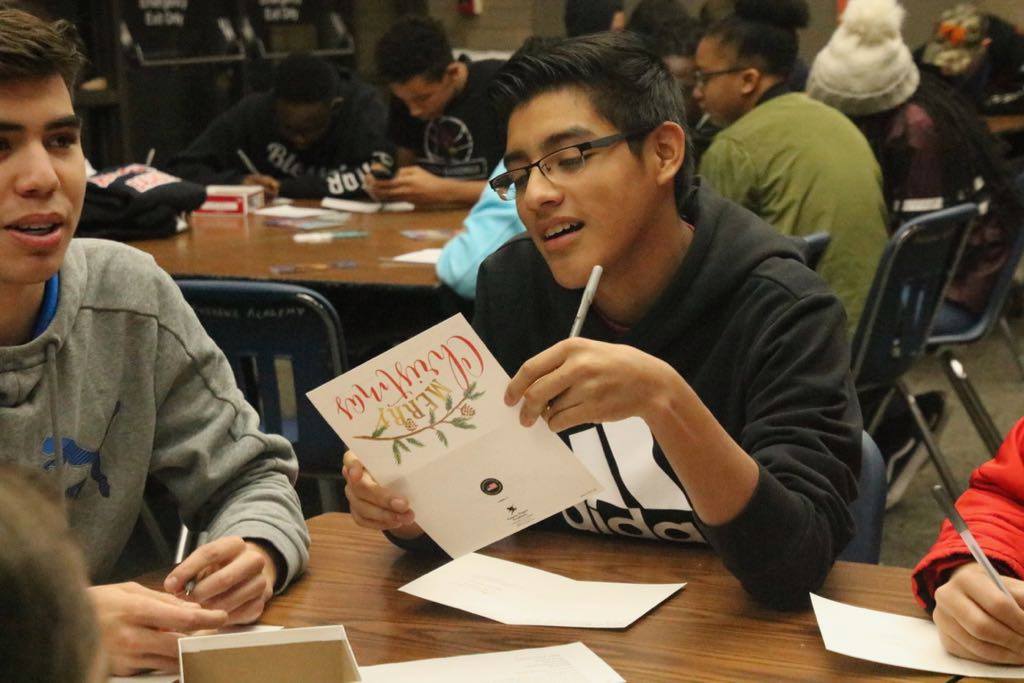