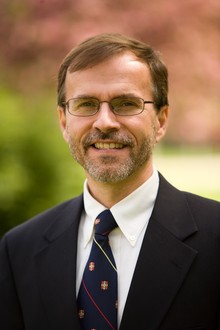 Denis Fortin is professor of historical theology at the Seventh-day Adventist Theological Seminary, Andrews University, in Berrien Springs, Michigan. Since joining the Seminary faculty in 1994, Fortin has served also as director of the Master of Divinity program (1999-2001), associate dean (2000-2004), chair of the Department of Theology and Christian Philosophy (2006), and dean (2006-2013).

Born in Quebec City, Canada, Fortin received a Bachelor of Arts degree in pastoral ministry from Canadian Union College (now Burman University), Alberta, in 1982. He earned a Master of Divinity from the Seventh-day Adventist Theological Seminary of Andrews University in 1986 and a Doctor of Theology (PhD) from the Université Laval, Quebec, in 1995. His dissertation studied the developments of three Adventist denominations in Canada in the nineteenth century. Prior to coming to Andrews University, he served as a pastor in the Quebec Conference of Seventh-day Adventists. He currently also serves as teaching pastor of the One Place Fellowship on the campus of Andrews University.

He is involved in a number of scholarly societies, among them the American Academy of Religion, the Adventist Society for Religious Studies (president, 2019), the Adventist Theological Society, and the Phi Kappa Phi Honor Society.  He has served on numerous committees for the Seventh-day Adventist Church and on the Commission on Faith and Order of the National Council of the Churches of Christ in the U.S.A. (1999-2013).  He has received the Daniel A. Augsburger Excellence in Teaching Award (Andrews University, 2006), the Siegfried H. Horn Award for Excellence in Research and Creative Scholarship (Andrews University, 2017), and the Don F. Neufeld Medallion of Excellence (Burman University, 2017).

Fortin has authored many publications on Adventist history and theology. His latest publications include a Bible study guide, Oneness in Christ, on unity in the Church (2018) and a companion volume One in Christ: Biblical Concepts for a Doctrine of Church Unity (Pacific Press, 2018). His annotated 125th anniversary edition of the Ellen G. White classic, Steps to Christ (Andrews University Press, 2017), received widespread support and praise.  He is also co-editor of The Ellen G. White Encyclopedia (Review and Herald, 2013) and in 2004 published Adventism in Quebec: The Dynamics of Rural Church Growth, 1830-1910 (Andrews University Press). Forthcoming publications include a biography of Adventist church leader George I. Butler (Pacific Press).

Fortin is married to Kristine Knutson (MA in Educational Psychology). They have three children: Kimberly in Port Byron, New York; Mark in Buchanan, Michigan; and Erika, who floats around the world on a cruise ship.  In the spring 2019, Denis and Kris walked the French pilgrimage road, the Way of St. James (800 km/500 miles), to Santiago de Compostela, Spain.