Potential That Goes Beyond

For the 2015–16 graduate students in the Andrews University School of Architecture & Interior Design, the words of Winston Churchill, “We shape our buildings; thereafter they shape us,” extend beyond buildings to the community in which they live, as they helped bring the twin cities, Benton Harbor and St. Joseph, closer together toward a common architectural goal.

Over the last several months, the 2015–16 graduate Urban Design Studio class, led by Andrew von Maur, professor of architecture, has been recognized with six national awards for excellence in the field of urban design and town planning for their work on “Twin Cities Harbor: A Study of Potential in Benton Harbor & St. Joseph, Michigan.” The purpose of the study was to prepare information to suggest that the Twin Cities harbor area is on the cusp of great transformation.

The project had several goals: to honor and celebrate the essence of Benton Harbor and St. Joseph both in their distinct and shared identities; to study the existing working harbor and conceptual changes to its location, operation and site design; to study how the harbor area can shape an attractive gateway to the cities of Benton Harbor and St. Joseph; and to study how the harbor can help to support humans and the environment.

von Maur has been teaching at Andrews since 2003 and has been leading the Urban Design Studio since 2004.

In preparation for the project the group embarked on an eight-day field trip to visit successful port towns in order to learn from them. Nantucket, Massachusetts; Providence, Rhode Island; Boston, Massachusetts; Camden, Maine; Portland, Maine; Newport, Rhode Island and Portsmouth, New Hampshire were among the places visited.

While there, students met with different designers, planners and architects to look at projects that were happening now and to see how ports are developed. It was important for students to visit working harbors with commercial shipping because Benton Harbor is also a working harbor.

Each year, von Maur selects a real client for the graduate students in architecture to work with in order to provide hands-on experience in the field.

“As a student in school, you don’t always get the sense that what you do has a big impact,” says von Maur. “It is sometimes difficult and abstract, this concept that all the work you do as a student is leading to something. In the graduate year for our architecture students, we try to very directly engage students with real work so that they can do it together with us before they graduate.”

Listing the benefits of this project for students, von Maur says, “Having a client provides accountability to real people. Students are taking their drawings every week to a stakeholder committee that includes the mayor of St. Joseph, the assistant city manager of Benton Harbor and all these other influential people. When you have to show up with your work and present it verbally, students take that seriously. They suddenly realize that it matters and that people care.”

In addition to an increased sense of responsibility, students are working collaboratively with one another and other interdisciplinary professionals.

“For an architecture student to suddenly have to deal with how their work plugs into all these other fields and professions, or even politics and taxes, it expands their horizons,” says von Maur. “This is good because it prepares them to go into the workforce.”

The other benefit von Maur sees is that they are able to meet every class period and ask God to lead them in making the right decisions.

“This presents a model for how students can think of themselves as a Seventh-day Adventist professional before they graduate,” explains von Maur. “If you don’t do something like that before graduation, then what happens is students don’t understand what reconciling their Adventism with their work as an architect looks like.”

When selecting this project, von Maur remembers his initial hesitation.

“God works in funny ways sometimes, He knows how to shut doors and he closed all the doors for all the other projects I was considering for my graduate students,” said von Maur with a laugh. “I ended up just trusting that the Benton Harbor project was what we were supposed to be working on. After the first meeting with the client I realized this is what we should be doing.”

The success of the study, which was originally intended to be a private project, is that it resulted in public open houses and meetings where community members who were interested in the work could see what they were producing. Additionally, the group did a two-month exhibition at the Krasl Art Center in St. Joseph with all the posters and research on display for community members to see.

“At first I thought nobody was going to care about this,” said von Maur. “I was skeptical, but on opening night, around four hundred people showed up. I watched them walk in, and then slowly, you see in their eyes the understanding that this project was about them and for them. And suddenly there was this buzz of energy in the room. It was a joy to see people appreciate the work and to share in that belief that there is potential in our community that we don’t yet realize, potential that goes beyond buildings and architecture and into the identity of the community and the relationship between the people and the community.”

On the heels of this success, the group was also hired to retrofit two shipping containers into an art gallery in order to exhibit the study in a physical fashion in the community. The container will be in the arts district of Benton Harbor first, and eventually moved to St. Joseph. Shipping containers allow for mobility of the project, so they are able to get as much exposure as possible—a mobile meeting space to showcase the project.

Additionally, a joint commission was developed comprised of members from both communities, whose intention was to carry on the work started by the Urban Design students.

One of the project’s major stakeholders, Harbor Shores Golf Club, hired von Maur and Jesse Hibler, an Andrews University alumnus, local architect and adjunct professor of architecture, to redesign their master plan for the neighborhood adjacent to the hotel.

von Maur drew on inspiration from Alex Kotlowitz, who was the keynote speaker at the 1999 commencement ceremony at Andrews, when von Maur graduated. Kotlowitz discussed the racial tensions between St. Joseph and Benton Harbor in his 1998 book “The Other Side of the River” and called for University students to not only do mission work abroad, but in cities that are in their backyard, like the twin cities.

“The power of the project is that is does something that nobody else has been able to do or was willing to do,” explains von Maur. “The diversity represented in our group of students was a bonus for the client. While the students were local, because they were from Andrews, in reality they come from varying places and had no agenda besides serving those in their backyard. I’m really happy that we were able to follow up on this keynote speech from 1999!”

Lehoko reflected on her participation in this study. “The best part of the experience, in my opinion, was knowing that we were doing something that many people care about,” she says. “It was something that could possibly change their lives for the better.”

von Maur adds, “I see Urban Design Studio as having the ability to provide a service to help different cities around the world to improve their situation to something healthier, and through our work point to Jesus and the plan that he has for us.”

He continues, “I think you have to help people where they are, and cities are one of those places. It was a huge blessing for our students and it was a way bigger success for the community than anyone expected. The reason people are investing in this, I think, is because they see the process that our University students helped start. It was really a blessing and it has the potential to build momentum to do good things. I don't think people are going to forget about this work any time soon.” 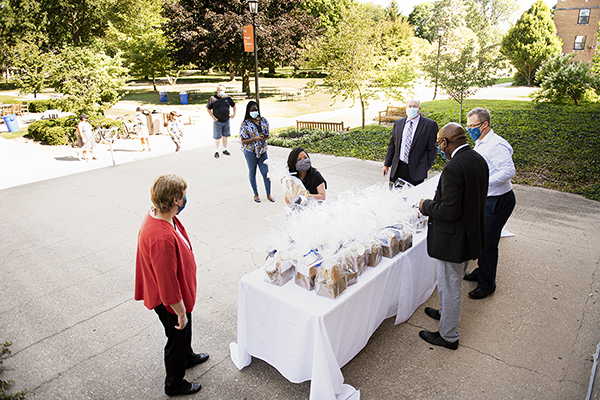