It was going to be a big day. A high day. A unique day. It was called Koinonia Day, born into conception just a few weeks prior through inspiration of the Holy Spirit.

“Koinonia is the Greek word for fellowship,” explains Dwight Nelson, senior pastor of Pioneer Memorial Church on the campus of Andrews University. “It is embedded in the Pentecost story where 3,000 people were baptized in Jerusalem. New members devoted themselves to the apostles’ teachings and the fellowship [emphasis Nelson’s]. The Bible says everyone was filled with awe.”

Nelson continues by quoting 2 Corinthians 13:14: “May the grace of the Lord Jesus Christ, and the love of God and the fellowship of the Holy Spirit be with you all” [emphasis Nelson’s].

“That was code to the followers of Christ that said that what we experience in him we share with each other,” Nelson says. “It’s a bond—blest be the tie that binds.”

In early March, Spiritual Life Committee was discussing next steps for the campus following the #ItIsTimeAU campaign that was still fresh in everyone’s minds. They recognized that the campus was galvanized and didn’t want the school year to end with “a chapel and two videos.” Nelson appealed to the committee:

“The world church’s eyes are on us. We cannot squander this moment.”

Shortly after the meeting Nelson got an email from Michael Polite, associate chaplain, asking for a meeting.

“It moved me,” says Polite about Nelson’s speech. “I didn’t know what to do, but I understood his heart in that moment. I felt like he was seeing an opportunity in a way that none of us around the table were seeing.”

And so, they met. They prayed. And they made a plan.

On this special Sabbath, New Life Fellowship, a historically black congregation which regularly meets in the too-small-for-them Seminary Chapel, and the historically predominantly white congregation of Pioneer Memorial Church, swapped worship spaces for the second church service that morning.

Everyone in each congregation: musicians, preachers, deacons and regular attendees, all experienced their regular worship service—just in a different space.

“This is not the first time relocating New Life to PMC has been discussed,” says Polite. “To date, I have been uncomfortable engaging in these discussions because the conversations were void of proper context and proper sensitivity needed to respond to a hurtful history. This conversation was different; it not only admitted that the current setup would not be ideal for the New Life community, but it also positioned New Life as the lead on crafting the experience and surveying the attendees to see how they felt in the PMC space.”

So, Koinonia Day served as a litmus test. Campus spiritual leaders created a simple survey card to distribute to both congregations in both locations, asking questions such as: Where do you usually attend church? Do you feel comfortable here? Do you feel like this was a positive thing? Were you able to encounter God today?

“It was a really beautiful opportunity to see something powerful that has never been done here,” says Melanie Reed, senior architecture major. “It was packed, and you saw people worshipping in a different way. It didn’t feel forced, or black and white, it felt like genuine, collective worship among people who all love God.”

“It was amazing to worship with other cultures while still feeling comfortable enough to worship the way I do on a regular basis,” she says.

It wasn’t just about the worship experience, either. Following the church service, PMC, New Life and One Place (a separate church service that meets in Newbold Auditorium in Buller Hall every week) would come together for a fellowship meal on the lawn outside the Campus Center.

However, when the weather forecast for Sabbath predicted rain, rain and more rain, event coordinators knew they had to prepare a contingency for that meal.

Enter Lhorraine London Polite, project manager for the provost. Instead of on the lawn as planned, on Friday London Polite worked with Paul Elder, director of facilities management, and his team to set up nearly 1,500 chairs at tables in Johnson Gym. And they didn’t stop there. After London Polite called multiple stores in the area to determine inventory availability, she and Elder personally went to seven stores in the area and purchased 86 identical portable canopies to be set up over the sidewalk between the Campus Center, where food would be served, to Johnson Gym, where food would be enjoyed, so no one would have to walk in the rain. It took six Plant Services team members four hours on Friday afternoon to set up the canopy pathway.

“Being in the gym was important,” says Nelson. “The ambiance and the energy of the room made all the difference. It was Koinonia.”

Serving that many people all at once fell to Mark Daniels, general manager of Dining Services and Linda Brinegar, executive chef, both of whom accepted the challenge with grace. Over 1,600 people were served their haystack lunch in under an hour.

Campus Ministries, led by June Price, University chaplain, coordinated the personal connection experience for the afternoon. Each person in line for food was given a sticker and told to sit at a table with a corresponding flag. At each table a stack of specially made cards Campus Ministries called a “Chat Pack” invited those seated at the table to ask and answer questions of themselves and each other.

Price and her team also facilitated room-wide conversation from the front, where they asked questions and had people stand and look around to see who else had experienced similar things in life. The questions covered everything from liking Taco Bell to losing a parent to personally experiencing discrimination.

“We wanted to ease the audience into understanding that we’re similar in deep things,” Price says. “The atmosphere was exactly what was needed for the occasion. There was great synergy and camaraderie as each table took initiative to actively get to know each other.”

The point was to mix with people who were different on multiple levels.

“It was inter-generational, inter-congregational and inter-cultural,” explains Polite. “One student shared with me that he sat with an elderly gentleman from PMC and had a wonderful conversation during which they learned they had more in common than they thought. That’s priceless.”

Garrison Hayes, student chaplain and MDiv student in the Seminary, felt Koinonia Day was exactly what was needed at Andrews University.

“From the respective church services to the lunch afterward, the divine fingerprints of God were all over it,” he says. “I believe God wanted the campus to get a small taste of Heaven, and the unencumbered fellowship we will enjoy there one day. He was successful in doing that.”

Bringing it All Together

Following the church service and fellowship lunch, a special Koinonia Vespers, facilitated by J. Murdock, pastor of One Place, allowed for a moment of prayer. Nelson provided an overview on how Koinonia came to be, and used the story to motivate a time of small-group prayer for the Andrews University campus. Andrea Luxton, University president, led attendees in corporate prayer, and Kenley Hall, associate professor of Christian ministry in the Seminary, gave a stirring charge.

“Let’s move Koinonia from being an event to being a lifestyle here at Andrews,” Hall urged.

So, what’s next for Koinonia Day and its impact on the Andrews University community?

PMC and New Life printed 1,500 survey cards and all of them were distributed between the two congregations. The responses on these cards will be tabulated and reviewed to determine and define next steps.

“Coming together is an intrusive project,” says Polite. “That’s what keeps more people from attempting it. It’s difficult. It requires sacrifice, time, effort, energy and monetary resources. But when you have a group of individuals willing to sacrifice those things together, it is a sign that staying the same is not an option for them. They become willing to sacrifice with one another.”

A multiracial team from PMC is tasked with leading in the identification of strategic steps forward that would create a more ethnically inclusive environment at PMC. At the same time, a leadership team at New Life will also be giving study to possible next steps. The two groups will spend fall semester 2017 reviewing, learning and building consensus. They expect any long-term commitments to be launched in January 2018.

“This is not unique to PMC or Andrews University,” says Nelson. “This is life. The nation is as fractured as we’ve ever been racially, and this is a show and tell for God to put something together that reaches far beyond Andrews.”

In his Koinonia Day sermon, Nelson referenced Philippians 1:6 several times: “He who began a good work in you will carry it on to completion until the day of Christ Jesus.”

“What God starts he finishes,” Nelson says confidently. “We believe he’s started something and we’re just as confident that he will finish it. The best is yet to come. With Jesus, that is always the case.” 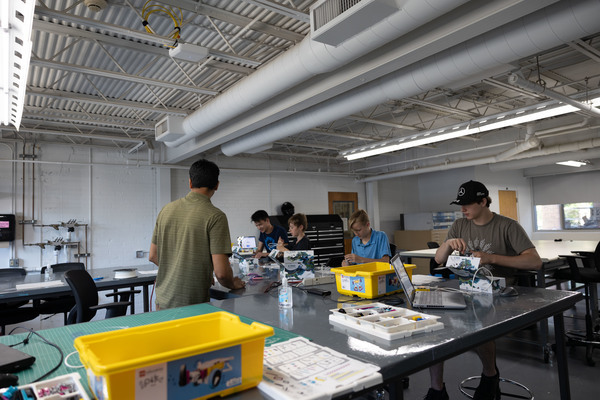