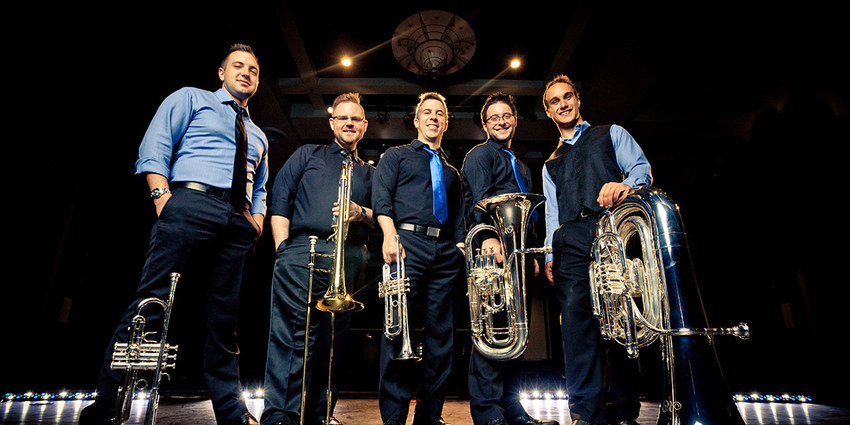 On Sunday, Nov. 18, at 7 p.m., Presidio Brass will perform in the Howard Performing Arts Center on the campus of Andrews University.

Founded primarily as a vehicle for promoting music education, Presidio Brass has become known as a contemporary brass ensemble that combines piano, percussion instruments, guitar and vocals with original arrangements to bring a fresh approach to well-loved music. Through their touring show of Hollywood’s greatest hits, “Sounds of the Cinema,” these five young men present film music with a good dose of wit and humor that together have become hallmarks of every Presidio Brass performance.

Trumpeter Miles McAllister is a Southern California-based performer and educator. Aside from his position in Presidio Brass, he is also third trumpet of the Santa Barbara Symphony and a member of the Disneyland Band at the Disneyland Resort. Miles has performed with groups like the Los Angeles Philharmonic, Pacific Symphony, Long Beach Symphony and San Diego Symphony. He can also be heard on “Star Wars: Rogue One” and “With Great Power: The Stan Lee Story.” Miles earned his Master of Music in trumpet performance at California State University Fullerton in 2015 and graduated from the University of Redlands in 2011 with a Bachelor of Music in trumpet performance.

Trumpeter Steve O'Connor earned a bachelor's degree in music from Michigan State University and a master's in music from Cal State Long Beach. He enjoys an active freelance career in the Los Angeles area, including performances with the Los Angeles Opera, Pasadena Pops, the Ojai Festival Orchestra, and the California and Riverside Philharmonics, as well as the Santa Barbara, San Diego, Pasadena, Redlands and San Bernardino Symphonies. Steve has also performed with the Moscow Symphony during a tour of the United States.

Described as a “great young brass virtuoso,” trombonist Joshua Bledsoe has established himself as one of the premier performers among a new generation of musicians. Joshua has received accolades on the international stage as an exciting soloist and has been the winner of numerous international solo competitions. He has appeared as soloist with the Missouri Symphony Orchestra, the University of Central Arkansas Symphonic Band, Arizona State University Wind Ensemble, Southeast Missouri State Wind Ensemble and Pensacola Civic Band. Joshua received his bachelor’s degree in music performance from Florida State University and his master’s and doctorate from Arizona State University.

Geoff Durbin is a professional trombonist and euphoniumist, enjoying an active livelihood as a soloist, clinician and freelance musician in Memphis, Tennessee. In addition to his position with Presidio Brass, he is currently on faculty at Ouachita Baptist University. Geoff received the first-place gold medal in 2013 and the silver medal in 2010 earned at the Leonard Falcone Euphonium Competition and has shared the stage with artists such as former Tonight Show Band leader Doc Severinsen and American Idol winner Ruben Studdard. He earned a bachelor’s degree from Indiana University of Pennsylvania, a master’s from the University of North Texas and a doctorate from the University of Memphis.

Tickets can be purchased at howard.andrews.edu. Prices are $15 for general admission and $7 for students (limit two tickets per student). For more information, call the Howard Box Office at 269-471-3560.