Held in response to religious hatred 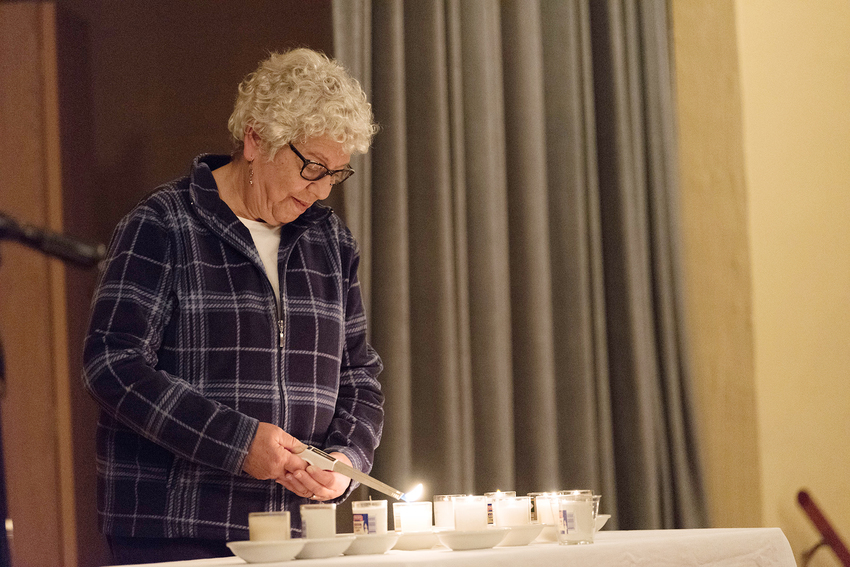 Candles were lit in honor of the victims of the Pittsburgh shooting, one for each victim and a twelfth for all others who have been victims of hate (Photo by Darren Heslop, University Communication staff photographer)

An interfaith prayer service took place on Monday, Nov. 5, 2018, in Benton Harbor, Michigan. Over 200 individuals attended the standing room only program, which promoted solidarity and healing and took a stand against all forms of hate and prejudice.

Following the tragic shooting at the Tree of Life Synagogue in Pittsburgh, Pennsylvania, the Interfaith Committee of the Andrews University Community Engagement Council reached out to the Temple B’nai Shalom of Benton Harbor and together they began to plan the service. Southwest Michigan’s Interfaith Peace & Justice Collaborative and The First Hebrew Congregation of South Haven joined the effort as co-sponsors.

The program began with a welcome from Marcus Muhammad, Benton Harbor mayor, who shared both a Scripture reading and a reading from the Quran. He commented, “I would like to challenge those who are here today to take this as a moment of new opportunity, freedom, love and justice for all, regardless of creed or religion.”

Teresa Reeve, chair of the Interfaith Committee at Andrews University, introduced the evening’s focus on prayer in the midst of mourning. She said, “Your action in being here tonight can help take some of the momentum out of the tide of hate that surrounds us. We share profound commonalities as we gather tonight…and we believe there is no place for hatred among God’s children.”

Significantly, candles were lit in honor of the victims of the Pittsburgh shooting—one for each victim and a twelfth for all others who have been victims of hate.

Attendees were given opportunity to participate in a litany that talked of moving forward. They read, “Amidst the darkness of hatred, we advance the light of love. Amidst the threats of violence, we advance the balm of peace…We come together, different people from different places, united in a common humanity and seeking a common good. In that there is hope.”

A representative of each of the three Abrahamic faiths (Christian, Muslim and Jewish) shared a Scripture, prayer and/or contemplation. Barry Fidelman, of the First Hebrew Congregation of South Haven, shared his struggle to come to terms with the events in Pittsburgh. Ultimately, he says he realized, “It was me.” He explained that he or anyone else who passes by an act of hate or injustice without standing up against it shares in the responsibility for such acts that follow. “There are three choices: anger, teaching and apathy…Yes, my apathy killed these people. I have always been afraid of losing friends or alienating business associates by calling them on their racist comments. I will choose never to miss a teaching opportunity again. Our generation must shed the moniker of the ‘generation of the ostrich’!”

Time was also given for silent prayer and stone laying, a custom within the Jewish faith that commemorates the deceased. In this setting, the stones also symbolized a commitment to build a better world. Sid Mohn, convenor of Interfaith Action, ended the evening, saying, “Now this sacred time of gathering comes to a close, but we leave vowing to birth another sacred time—a time where love and inclusion and justice will again be the hallmarks of this community and this our fractured nation. We leave now to act—to act as people of faith, hand in hand, building justice, repairing this our world.”

After the program, Reeve reflected, “I have seldom been in a room where the spirit of peace and harmony and dedication was so strong and palpable. This happened because people cared enough to reach outside their comfort zones and go beyond what fit in their busy schedules. God is good for planting the idea and bringing us all together!”