As Andrews University’s Howard Performing Arts Center enters its 16th year of operation, it once again features a variety of artists for the upcoming season. The 2019–2020 roster includes the Aruna Quartet, Committed, Canadian Brass, Sandi Patty, “Teshuah” by James Lee III with Carla Trynchuk, The Jazz Ambassadors and Adriana Perera.

The gold medal recipients of the largest chamber music competition in the world are making a stop on their Winner’s Tour across the Midwest. Since forming at Texas Tech University in
the fall of 2015, the Aruna Quartet has performed a wide range of traditional and contemporary repertoire. The Aruna Quartet is a prizewinner in national and international competitions including the MTNA National Competition, the Coltman Competition, The American Prize and the ENKOR competition. Most recently, Aruna was awarded the Gold Medal and Grand Prize at
the 46th Fischoff National Chamber Music Competition held on the campus of the University of Notre Dame. The Aruna Quartet will perform at the Howard Center on Sunday, Sept. 22, at 7 p.m.

Committed is an a cappella singing group comprised of five young men who love creativity, music and God. Founded in 2003, the group solidified their sound while at school together at Oakwood University in Huntsville, Alabama. Committed has been compared to many a
cappella groups like Take 6 and Boyz II Men, but what sets Committed apart is their versatility. Some of the members are instrumentalists and all of them are able to sing various styles of music including gospel, pop, R&B, contemporary worship and jazz. Their goal to inspire all they encounter has kept them creative and has placed them on major stages such as NBC’s “The Sing Off” where they emerged as season two champions. They have been called one of the nation’s top ten a cappella groups. The Committed concert will take place on Sunday, Oct. 13, at 7 p.m.

With four decades of performing under their belts, Canadian Brass continues to thrill audiences around the world. Their repertoire includes the works of Renaissance and Baroque masters, Classical works, marches, holiday favorites, ragtime, Dixieland, Latin, jazz, Broadway and Christian music as well as popular songs and standards. They have transformed a previously neglected group of instruments with a limited repertoire into a versatile and vital ensemble that can play everything from Gabrieli to Gershwin. Whatever the style, the music is central and performed with utmost dedication, skill and excellence. The Canadian Brass concert will take place on Sunday, Nov. 17, at 7 p.m.

Simply known as “The Voice,” Sandi Patty is a highly acclaimed performer with five Grammy Awards, four Billboard Music Awards, three platinum records and five gold records. Sandi is the most awarded female vocalist in contemporary Christian music history with 40 Dove Awards. Though her career is heavily rooted in the gospel music industry, Sandi has also extended her musical genre. She has performed with symphonies across the country and headlined the title role in sold-out performances of the musical “Hello Dolly” in January 2012. In addition to her prolific musical career, Sandi is also an accomplished author of seven books, receiving the 2006 Silver Angel Award for her bestseller “Broken on the Back Row.” Enjoy an evening with Sandi Patty on Sunday, March 8, at 7 p.m., as she shares her message of hope, life and love.

James Lee III, professor of music theory and composition at Morgan State University, is an accomplished pianist and composer widely praised for his work in both areas. He is viewed by notable musicians as one of the most promising young contemporary composers. A son of the Great Lakes State, former student at Andrews University, and graduate of the University of Michigan, Lee returns on Saturday, March 28, at 8:30 p.m., to premiere “Violin Concerto No. 2 ‘Teshuah’” performed by Carla Trynchuk, violin, and the Andrews University Symphony Orchestra, conducted by Chris Wild. In all of his writing, Lee aims to “compose music to reach the inner soul of the listener that elevates them regardless of race and religious affiliation.”

The Jazz Ambassadors is the official touring big band of the United States Army. Formed in 1969, this 19-member ensemble has received great acclaim at home and abroad performing America’s greatest original art form, jazz. The band’s diverse repertoire includes big band swing, bebop, Latin, contemporary jazz, standards, popular tunes, Dixieland, vocals and patriotic selections, many of which are written or arranged by members of the Jazz Ambassadors. On Sunday, March 29, at 4 p.m., the band will present a program titled “The Greatest Generation,” a tribute to World War II servicemen and servicewomen. It will include a video that is narrated with historical elements from World War II. The Jazz Ambassadors’ rigorous touring schedule and reputation for excellence has earned it the title “America’s Big Band.”

Adriana Perera is professor of music theory and composition at Andrews University. She is a prolific composer with her main interest being in sacred music. More than 200 sacred pieces written by her are currently performed by choirs, orchestras and soloists around the world. On Saturday, April 4, at 8:30 p.m., a concert of her compositions will be performed by various artists including Julie Moore, mezzo-soprano; Charles Reid, tenor; Wayne Bucknor, piano; Carla Trynchuk, violin; Claudio Gonzalez, viola; Chris Wild, violoncello; and Karin Thompson, violoncello; just to name a few. Also performing will be the University Singers, conducted by Stephen Zork, and the Andrews University Symphony Orchestra, conducted by Chris Wild.

For tickets, information and a complete listing of performances—including the Sunday Music Series and Andrews University Department of Music concerts—call the Howard box office at 888-467-6442 or 269-471-3560 or visit howard.andrews.edu. 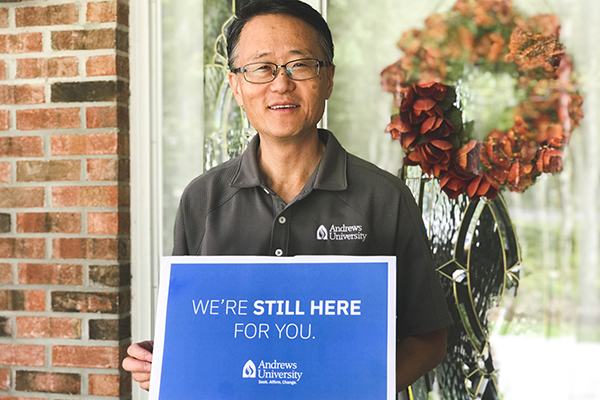