On Feb. 15, 2020, the Charles Elliott Weniger Society for Excellence held their 45th Annual Awards Presentation at the Loma Linda University Church in Loma Linda, California. At this event, President Andrea Luxton received a Weniger Medallion, as did Reinder Bruinsma, Richard H. Hart and A. Ganoune Diop.

The Charles Elliott Weniger Society for Excellence was established in 1974 in honor of Charles Weniger, who had served as dean of the Seventh-day Adventist Theological Seminary in Washington, D.C., an English professor and a gifted public speaker. Created by three of Weniger’s friends—Jerry Pettis, Clinton Emmerson and John Osborn—the society aims to honor Weniger’s memory and the qualities of excellence paramount in his life by recognizing the contributions made to the world by people with similar significant traits of character. As of this year, 182 individuals have received the Weniger Medallion.

“Dr. Weniger himself was a consummate educator, with strong commitment to the importance of Seventh-day Adventist education,” says Luxton. “He modeled, however, what he preached, and countless students and colleagues remember his generosity of spirit, genuine care for his students and his unassuming way of making Christian education irresistible.”

The Awards Presentation event began with a welcome from Bernard A. Taylor, president of the Weniger Society Executive Committee, and a feature from Warren L. Johns in remembrance of Weniger. Each of the 2020 medallion recipients was then introduced and awarded with the medallions.

President Luxton was recognized for her commitment to excellence as an educator and as president of three different Adventist colleges/universities: Newbold College, Burman University and Andrews University.

“It was a great surprise and honor. I have a lot of admiration for many of those who had received the honor before, and it was an honor to be listed as a recipient along with those individuals,” says Luxton.

Following the presentation of the medallions, A. Ganoune Diop delivered the Clinton Emmerson Annual Address titled “Window on a Larger World.”

After this, 13 undergraduate students from accredited North American Seventh-day Adventist colleges and universities were recognized as Weniger Fellows Student Scholarship Fund recipients. Each of these students was chosen for exhibiting excellence in their spirituality, academics, civic service and leadership.

Yosia Nurhan, the Weniger Fellows Student Scholarship Fund recipient from Andrews University, is a junior mathematics and physics studies major. He is a J.N. Andrews Scholar, the 2019–2020 vice president of Pi Mu Epsilon, the current mathematics president for eigen* (the math-physics club), the financial vice president for the Association of Indonesian Students and the leader of a mountain biking club that he started. He has also completed extensive research with both Shandelle Henson, professor of mathematics and professor of ecology, and Desmond Murray, associate professor of chemistry.

Karen Johnson-McWilliams, administrative assistant for the Department of Mathematics, describes Nurhan as a “cheerful, outgoing, helpful presence wherever he goes, and he is involved in various groups as a leader who influences people to behave morally and enjoy outdoor activities such as mountain biking, hiking and camping.”

Nurhan was both grateful and surprised to be chosen as a Weniger Fellows Student Scholarship Fund Recipient. “The financial support that I will receive from this award will help me in many ways. On top of that, I am glad that service is acknowledged no matter how small.”

The Awards Presentation program concluded with a recognition of gifts given to the society, special music, memorial tributes and a blessing and benediction. Attendees were then invited to a reception honoring the memory of William A. Loveless, Weniger medallion recipient in 2000. 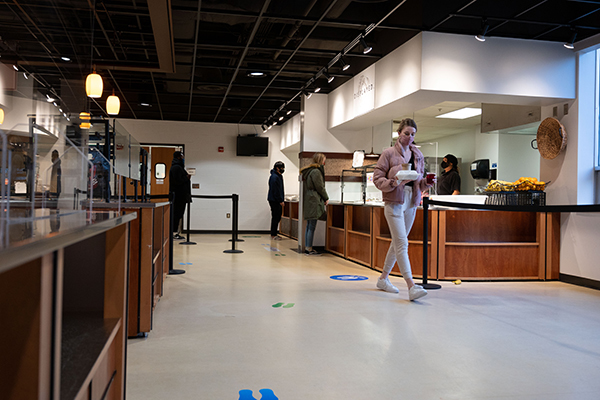