On Thursday, Sept. 3, 2020, the Andrews University Department of Chemistry & Biochemistry will host an online lecture by James M. Tour on the origins of life, a topic that has generated significant controversy in the field of prebiotic chemistry. Tour, who holds three professorships at Rice University in chemistry, materials science and nanoengineering, and computer science, will give a presentation titled “Scientists Are Clueless about the Origin of Life.”

Tour is an accomplished synthetic organic chemist and nanotechnologist and a self-described practicing Messianic Jew for over 40 years. He has written and lectured extensively on origin of life research and specifically on prebiotic chemistry. Tour has over 700 research publications and over 130 patents in multiple areas. He has also developed strategies for retarding chemical terrorist attacks.

For pre-college education, Tour developed the NanoKids concept for K–12 education in nanoscale science and also Dance Dance Revolution and Guitar Hero science packages for elementary and middle school education. These resources are currently used by over 450 school districts and 40,000 teachers with over 1 million student downloads.

Tour has garnered many awards and recognitions, including the 2020 Royal Society of Chemistry’s Centenary Prize for innovations in materials chemistry with applications in medicine and nanotechnology. In 2019 Tour was ranked in the top 0.004 percent of the 7 million scientists who have published at least five papers in their careers. He was named among “The 50 Most Influential Scientists in the World Today” (2019), listed in “The World’s Most Influential Scientific Minds” by Thomson Reuters (2014), named “Scientist of the Year” by R&D Magazine (2013), and was ranked one of the top 10 chemists in the world over the first decade of the 21st century (2009). He has been selected for or elected or inducted into the Royal Society of Chemistry, the National Academy of Inventors, and the American Association for the Advancement of Science. His awards include the Arthur C. Cope Scholar Award from the American Chemical Society for his achievements in organic chemistry (2007), the Feynman Prize in Experimental Nanotechnology (2008), and the Trotter Prize in “Information, Complexity and Inference” (2014).

Additionally, Tour’s research and intellectual property has been the basis for several companies.

Tour is as prolific and public about Bible studies as he is about science. His July 19 podcast marked the 100th installment of his series on the book of Genesis that started in 2018. Audio copies can be heard at https://www.jmtour.com/personal-topics/audio-files/series-book-of-genesis/. He has an active social media presence on Facebook, YouTube, Instagram and Twitter. His YouTube lectures consist of science, faith and Bible studies.

Tour does not see a conflict between faith and science, having been quoted as saying, “I build molecules for a living. I can’t begin to tell you how difficult that job is. I stand in awe of God because of what He has done through His creation. Only a rookie who knows nothing about science would say science takes away from faith. If you really study science, it will bring you closer to God.”

Tour’s upcoming lecture at Andrews University will be a unique opportunity to present scientific arguments in a learning community of shared faith and values. He plans to offer a scientific critique, not one based on philosophy or theology, of current origin of life models. Specifically, he will address the lack of chemically valid proposals that explain the synthesis, information, assembly and life-function that ultimately converted chemical building blocks into the structures and functions of life. 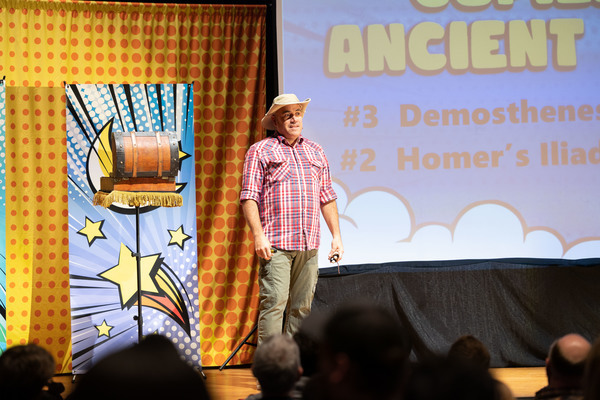