Home to numerous Andrews alumni and former professors, MEU also shares several connections to Andrews University. MEU’s theology department is under the Andrews curriculum, and graduates receive Andrews diplomas through this partnership. Most of the MEU faculty also do graduate work with Andrews.

Brian Manley, chair of the Department of Art and Design at MEU and Andrews alum, shared that he and his wife, Lori, are grateful they avoided injury in the explosion. Lori Manley works as a registrar at MEU and is also an Andrews alum.

“Our hearts are drawn out for the families impacted by the explosion, especially the impact on the economy and on new high school graduates’ ability to start university,” said Brian Manley.

Ron Vyhmeister, academic dean and IT manager at MEU, Andrews alum and former professor, shared his experience from the day of the explosion.

I was with MEU president Larry Lichtenwalter (AU alum) in his office. We heard the first smaller explosion and, after a few seconds, checked out the city and saw the small black cloud. While we were watching through the open window, we saw the big explosion and just stood there aghast.

Moments later, I wound up stumbling backwards under the impact of the shockwave and managed to catch myself on the office door about 20 feet back. I heard the sound while I was stumbling. It was a surreal experience. At first, given the mushroom shape, I thought of a nuclear explosion, but the height of the explosion made me doubt that.

Campus damage was relatively limited. There was glass damage in several buildings, and drop ceilings were damaged (lifted up and then crashed down). By now campus is back to normal. Teams of faculty, staff and students have been going daily to the affected areas, working in coordination with ADRA to assist with the cleanup.

Vyhmeister noted the challenges existing for prospective students due to the explosion. He described one student whose parents and two siblings are now unemployed because the St. George Hospital shut down after the explosion.

Another student whose family is dependent on rental income from commercial property told Vyhmeister that all the renters are moving out.

A prospective fall MEU student was unable to complete the remaining portions of the GED exam after the only testing center in the country was severely damaged.

In the midst of the chaos caused by the explosion and made worse by the economic, political and COVID-19 crisis in Lebanon, Vyhmeister highlighted the importance of both prayer and financial support.

“The community has come together to clean up. We’ve been blessed with many stories of how people were saved by not being in harm’s way, due to a variety of issues, as small as just bumping into a neighbor on the way home, getting stuck in traffic, or other seemingly ‘random’ events. It’s clear that God had His hand on many people,” said Vyhmeister. “The timing of the explosion was providential. If it had happened earlier, the death toll would have been higher due to the business traffic, and later in the evening due to people being out eating.”

Vyhmeister also acknowledged that the explosion brought international attention to Lebanon, creating a movement to resolve the country’s political challenges. “We pray that these issues may be resolved soon so that the government can deal with the multiple issues facing the country.”

Larry Lichtenwalter, MEU president, Andrews alum and former professor, explained that the explosion has increased the stress level and sense of helplessness and hopelessness among local Lebanase faculty and staff—particularly those who weathered Lebanon’s civil war as well as the recent socio-economic and political realities. These realities include social unrest, an 80 percent devaluation of currency, the collapse of the government and the challenges of COVID-19.

As a result of these realities he expressed MEU’s continual need for prayer and gratefulness for acts of kindness, words of encouragement and financial support.

“This is a first for our expat community and students who have learned a lot about life here overnight,” he said.

Lichtenwalter also described what it was like for himself and others on the day of the explosion:

Some of our faculty, staff, and campus residents experienced the power of the explosion's aftershock. Only one student was hurt when the door she was cleaning slammed against her wrist. It was a sobering moment.

Students congregated on the campus lawn overlooking the site some 3.5 miles below. They were clearly shaken. Some were crying. They were fearful that it was an attack and there was more to come.

I was in my office and heard the initial explosion. Looking out the window I watched the flames and then the second massive explosion. I was in the process of opening the window when the aftershock hit, pushing the window open. It was one of those pressurizing moments when one needs to clear their ears—something that lingered through the evening.

We prayed with students and encouraged them. These past two weeks MEU students, faculty and staff have been busy on-site sweeping up glass, cleaning up all kinds of debris, delivering food, working with ADRA and other NGOs. It has been an incredible opportunity for young people and MEU faculty/staff to serve our larger community. One student told me that she has never experienced this kind of thing in her life but now understands more than ever before that this world is not our home and that there is much work to do for hurting people who have no hope.

“By a renewed sense of the times in which we live and that God has brought us here for these moments, I take courage that in spite of the devastation and chaos, the hope we have will shine brighter,” said Lichtenwalter. “We have a team of young people who visit homes to pray and just let people talk about their experience. We see Jesus at work in the midst of incredible brokenness. We are reminded that we are mere humans.”

To contribute financially to the efforts in Lebanon, visit “Impact for Lebanon,” a GoFundMe initiative set up on August 6 by Glenn Russell and Steven Manoukian, a Lebanese pastor now serving in the United States. An account with the same name was also set up through Adventist Giving. As of September 4, nearly $40,000 total funds had been raised.

Russell also did a Zoom interview with Rick McEdward, president of the Middle East North Africa Union. The video is available here. 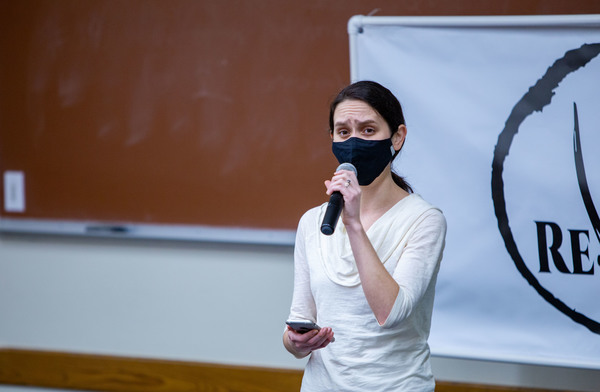