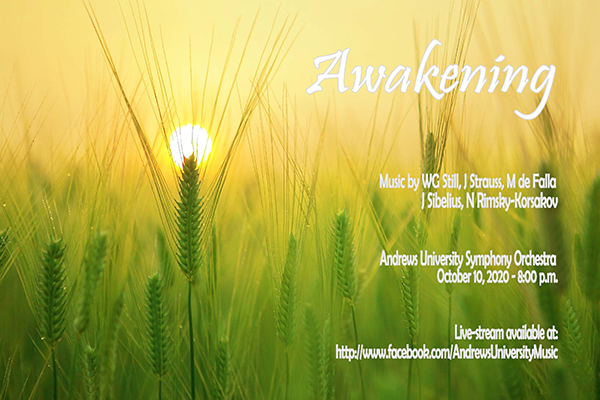 Following six months apart, the Andrews University Symphony Orchestra is pleased to return for its first public performance of the fall 2020 semester, titled “Awakening.” The concert will take place on Saturday, Oct. 10, at 8 p.m., and will only be available to view as a livestream at facebook.com/AndrewsUniversityMusic.

Each of the five compositions at this concert can be interpreted to have varying relations to the concept of awakening, and that can be said for both the ensemble and its members. The first piece is a nod to infancy and the nurturing reassurances that individuals rely on with family members (and faith). This opening work, titled "Mother and Child," was composed in 1943 by American composer William Grant Still. The second composition begins with the delicate rays of the sun reflecting gently on the Danube River, perhaps depicting a beautiful morning in the city of Vienna, Austria. Instantly recognizable, this famous waltz by Johann Strauss II titled "On the Beautiful Blue Danube" will sparkle with radiance and joy. The third piece on the program is especially rousing—titled "Jota," it is a dance excerpt from Spanish composer Manuel de Falla’s ballet "The Three-Cornered Hat."

Following an intermission, the musical adventure will continue with a composition that was first titled “Finland Awakes” when composer Jean Sibelius wrote it in 1899. He initially composed it as a contribution to an exhibition that was illuminating Finnish traditions and history in an effort to resist oppression by the neighboring Russian Empire. Now known by the title "Finlandia," it is an inspiring example of courage and hope arising out of darker times. The fifth and final piece on the program, "Russian Easter Festival Overture," is a depiction of an Easter weekend as envisioned by composer Nikolai Rimsky-Korsakov in his Russian Easter Festival Overture. The piece begins with Russian Orthodox chant melodies, depicting priests leading an Easter service, then transitions toward the sound of bells typical of Russian churches. As the music builds, it culminates in a more public and festive Easter celebration.

The Symphony Orchestra looks forward to welcoming its audience members, wherever they are located. 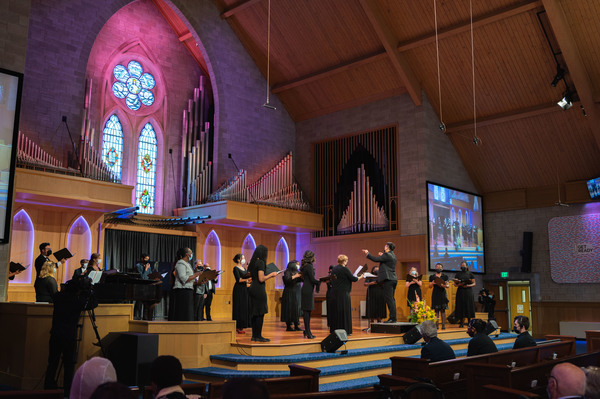