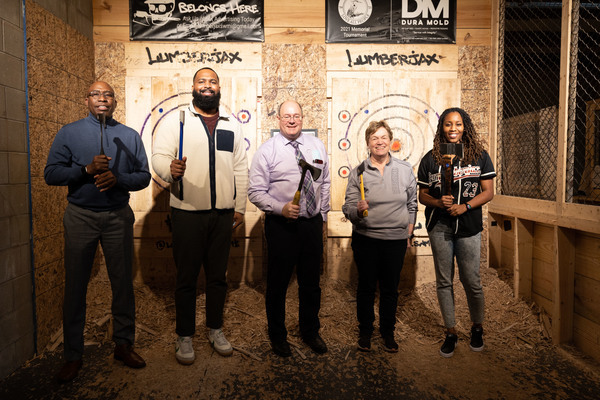 By: Dalry Payne, senior executive assistant to the president

Andrews University employees reached and surpassed their campus’ 2021 fundraising goal for United Way of Southwest Michigan, contributing more than $18,000 in payroll pledges and cash gifts to aid in the fight for the health, education and financial stability of every person in Berrien, Cass and Van Buren Counties. More than 100 employees contributed to the world changing projects #closetohome by our friends at United Way. Those donations put us $1,000 ahead of last year’s giving total.

To celebrate that success, President Luxton met with her fellow administrators on Nov. 17 at Lumberjax in St. Joseph, Michigan, for The Official 2021 Andrews Presidential Axe Throwing Competition. She competed in three rounds against Christon Arthur, provost; Chip Meekma, vice president for Financial Administration; and Michael Nixon, vice president for University Culture & Inclusion, for a chance to draw a lucky name from the 2021 United Way campaign donor’s list. Prizes, which were graciously provided by United Way of Southwest Michigan, included a $100 gift card for the Boulevard Inn and Bistro in Saint Joseph, a KitchenAid 4-slice toaster. Village Hardware in Berrien Springs also offered a $50 gift card as a prize for a campaign donor.

While this closes the formal part of our campaign, it’s not too late to contribute to the United Way campaign and add to the overall total for Andrews University. An e-pledge giving option is still available until Dec. 3. If you have difficulty making a gift electronically through that link, please contact our United Way campaign team at unitedway@andrews.edu.

We would like to especially thank Lumberjax for donating the space and time for the competition as well as the Boulevard Inn and Bistro, Whirlpool and Village Hardware for contributing the gift prizes. Additionally, President Luxton would like to express her gratitude to Danielle Pilgrim, associate chaplain, for lending her expertise as presidential trainer, coach and pinch hitter. And of course, thank you to the amazing employees of Andrews University who are fully committed to finding ways to address these local challenges and to help change the world right here in southwest Michigan. 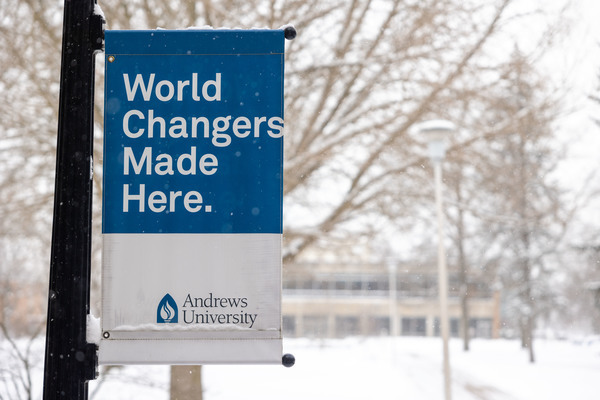