On Eastern Mediterranean history and culture 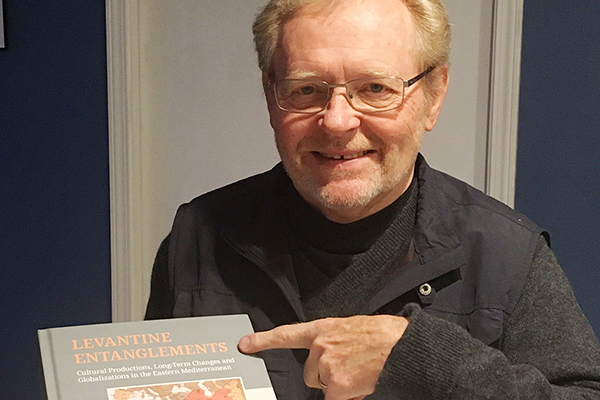 Øystein S. LaBianca, retired professor of anthropology at Andrews University, recently completed a decade-long book project that reveals the history of human cultural production in the Mediterranean region. The volume, which LaBianca edited with Terje Stordalen, professor of Hebrew Bible and Old Testament studies at the University of Oslo, is titled “Levantine Entanglements: Cultural Productions, Long-Term Changes and Globalizations in the Eastern Mediterranean.”

The idea for “Levantine Entanglements” first came about in 2007 when Stordalen invited a broad range of scholars to participate in a workshop. During the event, LaBianca and Stordalen discovered that they had an overlap in interests about the local communities and daily lives of people along the Eastern Mediterranean.

“Levantine Entanglements” argues that the agency of these local communities is a key to understanding the history of long-term change and cultural production in the Levant. “Stordalen was in the process of developing a method for answering these questions combining biblical texts, archaeological finds and comparative ethnography in order to uncover clues to that silent majority,” explains LaBianca. “[They] neither built great monuments nor left much in the way of writings, but nevertheless managed to survive under the often-oppressive rule of local elites, powerful kings and emperors in the region.”

As a cultural anthropologist and archaeologist, LaBianca contributed to the project with his knowledge of a methodology for uncovering silent majorities through archaeological food systems research. “It is an approach pioneered by our team at Tall Hisban for detecting changes over time in how local families and whole communities went about providing for such basic needs as food, water, shelter and protection,” shares LaBianca. He and his colleague Stordalen felt the approach held promise for beginning to understand the communities of the Eastern Mediterranean.

“Levantine Entanglements” provides an important understanding of the Eastern Mediterranean area because its focus on the silent majority instead of the emperors and kings. “Our task was to contest this top-down approach, which has obvious orientalist and sometimes even nationalist subtexts, and come up with an alternate, bottom-up approach focused on the contributions of the region’s invisible silent majority,” explains LaBianca. “Not an easy task to be sure, as most written records from this region reflect the point of view of a literate minority, not that of the mostly illiterate, often less wealthy and permanently settled, silent majority.”

Contributors to “Levantine Entanglements” include scholars on specific places and ideologies, ideology, practices and communities, localities and global discourse and local communities and trans-local formations.

The volume contains 45 illustrations in color and black and white, and is available in hardback and eBook formats.