Observed at Andrews University in November 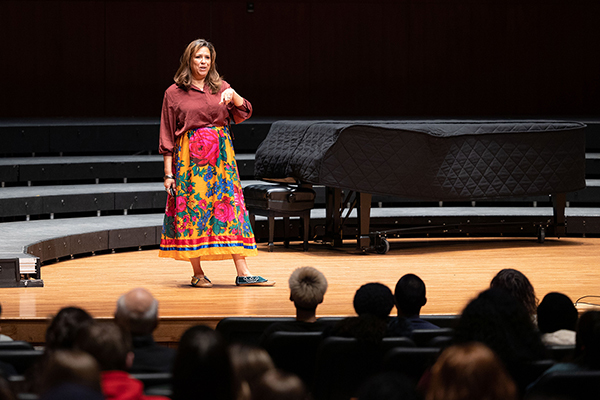 Throughout the month of November, Andrews University observed National Native American Heritage Month. The celebration honors the contributions and rich history of nearly 600 tribes in the United States. The diversity among the hundreds of tribes represents approximately 250 languages and encompasses countless individual identities and experiences.

Andrews University is privileged to have over 50 students who identify as Native American. Additionally, the Berrien Springs campus resides on land once taken from the local Pokagon Band of the Potowatomi tribe. These simultaneously meaningful and difficult truths affirm the importance of recognizing and engaging with the Native American communities within the larger Andrews community.

Michael Nixon, vice president of University Culture & Inclusion, states, “Part of the work of our office has been amplifying non-dominant narratives. One of those non-dominant narratives is the journey of Native American/First Nation persons, both in this country and in North America in particular. As an extension of our truth, racial healing and transformation work through our TRHT campus center, we thought that one of the stories that we needed to do a better job of telling was how that Native American story connects to our campus’ journey.”

In 2020, Andrews University was awarded a Title III Strengthening Institution Grant by the U.S. Department of Education. One of the goals of the grant is to improve the enrollment, retention and graduation rates of at-risk and Native American students. The grant has helped establish an endowment fund and a system of faculty support to provide scholarships and guidance to Native American and at-risk students. The program fosters ongoing meetings with the local Pokagon Band with the goal of amplifying community voices and building an avenue of learning and engagement.

A recent event that aimed to provide support for Native American students on campus was a Meet & Greet Function held on Oct. 30, 2022. Padma P. Tadi Uppala, PhD, chair of the School of Population Health, Nutrition & Wellness, and Yasmina Herinirina, Title III grant activities coordinator, invited students from the Native American population on campus to meet with faculty and staff. The gathering opened new forums of discussion and introduced a support system on campus.

On Thursday, Nov. 10, the Office of University Culture & Inclusion, Center for Faith Engagement and School of Population Health, Nutrition & Wellness invited members from the Pokagon Band of the Potawatomi tribe to present a University Forum. Madalene Big Bear, a member and representative of the Pokagon band, spoke to the Andrews community about the past, present and future of Native American tribes in the United States. She referenced the oral history that her Potawatomi tribe keeps, and their role as “keepers of the fire”—a fire both sacred and literal. As part of a community spanning many waterways, she emphasized the diversity of what once were many people groups throughout Michigan alone.

She went on to highlight the extreme loss and genocide that indigenous peoples have suffered, outlining a troubling history of systemic racism against the tribes that has carried into the 21st century. These have included the seizure of land, the forced separation of families, laws that have denied Native Americans their personal rights, and physical crimes enacted against both property and individuals. “For all my knowledge and education, there is nothing that protects my people from being removed again,” she shared solemnly.

Big Bear suggested multiple ways for her audience to provide support, including engaging in hard conversations, promoting accurate resources, and sharing their personal records. “This long history of fighting for existence is what brings me here to share with you today,” she affirmed. “You are a part of our home.”

The program closed with a reading of the Andrews University Land Acknowledgement Statement. The document recognizes and acknowledges that the land used by the Berrien Springs campus was seized in the past from land owned by the Pokagon Band of Potawatomi tribe during the 1833 Treaty of Chicago. It outlines a portion of the history of the Potawatomi tribe and the hardships they faced after being forced from their land. The land acknowledgement seeks to recognize the past, honoring history and diversity, as the University moves forward into the future.

“The biggest thing that jumped out at me is there’s a lot that we don’t know.” Nixon reflects. “That’s something I heard from a number of students and employees who were at the forum. The presentation by Madalene Big Bear, and the way that she presented, was so well done because she was very direct and authentic, but she was also able to do it in a way that was engaging and invited people into their story. There is so much more for us to learn.”

Andrews University plans to continue learning about and celebrating Native American heritage and culture on campus in the future. Uppala notes that the Title III grant continues for two more years, affirming that “we want to build on that and have more programs.” As a minority-serving institution, the University hopes to offer as many opportunities for its students as possible.

“Our local tribe is a big part of our community, even though their story can oftentimes be forgotten, overlooked or left behind. Bringing these stories to the surface and to the light has a level of significance,” Nixon expresses. “I think that really amplifying their presence and their voice to our broader campus community can hopefully continue to make folks feel more comfortable as it pertains to engaging with our campus. Learning and engagement is a two-way street. We have a lot of great information to offer, but there’s a lot of great things we can learn from others as well.”