By two professors in the Department of English 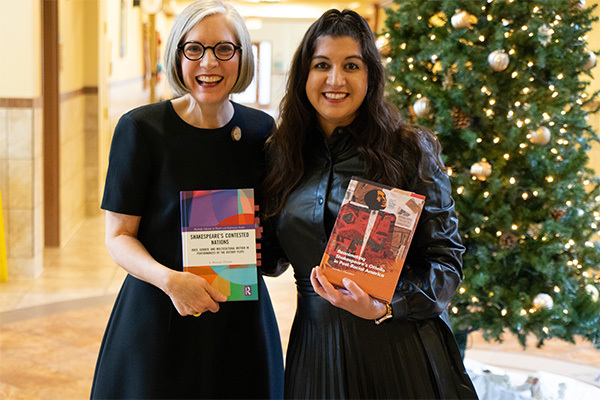 On Tuesday, Dec. 6, the Andrews University Department of English hosted a double book launch for professors and Shakespeare scholars L. Monique Pittman and Vanessa I. Corredera. Students, faculty and staff came together to celebrate the two recent academic publications and hear from the authors about their work.

Gary Burdick, dean of research, notes, “It is significant that Andrews University has two world-renowned Shakespeare scholars. In these books, Professors Pittman and Corredera show the relevance of Shakespeare to the major social issues of today.”

Pittman’s book, “Shakespeare’s Contested Nations: Race, Gender, and Multicultural Britain in Performances of the History Plays” was published in May by Routledge. Her book analyzes productions of Shakespeare’s history plays in the context of a variety of political crises throughout the third millennium, including the Iraq War, cultural Olympiad and Brexit campaign. She highlights performances between 2000–2016, arguing that they manifest a post-imperial nostalgia that often overlooks the impact of women and people of color. This act disallows a re-examination of the British nation’s multicultural past, present and future in more intentional, self-critical and truly progressive ways.

She affirms, “All my research is repeatedly about how art and its, in my case, performative elements, function to enhance, deepen, strengthen our awareness that we are responsible for one another. We belong and have a home on this planet and a responsibility to create home spaces for others. The book is a manifestation of that commitment. We should ensure that we are doing things in our little corner of the world that help others feel at home in that space.”

Corredera’s book, “Reanimating Shakespeare’s Othello in Post-Racial America,” was published by Edinburgh University Press in November. The work places an archive of 21st- century appropriations of “Othello” in conversation with pre-modern critical race studies, media studies and critical race theory. Corredera argues that recent representations of Shakespeare’s play across various genres and media have perpetuated different racial frameworks in a time imagined as having overcome racial injustice: post-racial America (2008–2016). Through her analyses, she provides a method for ethical engagement with Shakespeare, “Othello” and the American “racial imaginary.”

Inspiration for academic analysis and social reflection can come from unexpected places. A podcast conversation was the spark that led to Corredera’s book. “Since I first read ‘Othello,’ I have found the tragedy both puzzling and troubling. I was also not convinced by claims that President Barack Obama’s election meant that America no longer ‘saw’ race. When I heard a random reference to ‘Othello’ in the podcast Serial, it inspired me to bring those two topics together,” she shares.

Corredera describes why it is important to continue studying Shakespeare. “From music to references in movies to commercials and beyond, Shakespeare appears everywhere in contemporary culture. This pervasiveness speaks to the cultural authority that Shakespeare continues to carry. I think it’s vital to interrogate the uses to which this cultural capital is put, especially when it comes to reifying or contesting issues of power and equity/inequity.” At the same time, Corredera notes that Shakespeare is not above critique: “Shakespeare’s works are amazing, beautiful, and moving. I really do enjoy reading and teaching Shakespeare. But they are neither universal nor ideologically neutral. We can love his plays but still cast a critical eye toward the potential problems they carry.”

At the book launch, both authors read out acknowledgements to family, friends and colleagues, and then gave short readings from their books. In the question-and-answer session that followed, they described their writing process, offered advice to student writers and gave information about ongoing and upcoming projects. Attendees enjoyed refreshments provided by the Department of English, including a custom-made cake for both professors.

Pittman and Corredera appreciate the academic community at Andrews University as well as their wider network of colleagues. About the book launch, Corredera shares, “It was such a joy to be able to celebrate with and say thank you to the community that supported me as I wrote the book. I’ll take one more opportunity to express gratitude to the communities within and outside of Andrews that supported me on this long journey. It would not be possible without them.” Pittman adds, “Thank you so much to our English department colleagues, especially Dr. Kristin Denslow and Ms. Carrie Hess, who coordinated the launch and allowed Vanessa and I to celebrate our work with students and friends here at Andrews.”

Meredith Jones Gray, professor of English, expresses, “Drs. Pittman and Corredera have modeled for their students and colleagues best practices of research and writing, meticulous and articulate literary scholarship, and perhaps best of all, supportive and collaborative scholarly work in the humanities. Through their focus on race and gender, Pittman and Corredera bring cutting-edge academic conversations as well as significant contemporary socio-cultural conversations to their classrooms. They have testified repeatedly to the many ways in which their conversations with their students energize them, their thinking, and their writing.”

Speaking to the importance of the research and publication efforts Pittman and Corredera have undertaken, Amy Rosenthal, dean of the College of Arts & Sciences, says, “Faculty publications are an essential part of every academic institution. For scholars, sharing our work with a wider audience through publication is both a personal and professional achievement that directly impacts what happens in our classrooms.” She continues, “The academic experience encompasses more than just the acquisition of knowledge. Research and publications demonstrate the application of the essential components of our disciplines and the contributions that our faculty make to the broader academic community.”