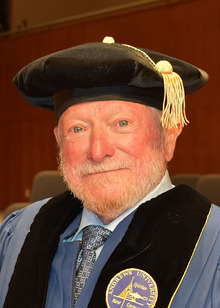 In 2019 Erland Pettman received a Doctor of Science, honoris causa, from Andrews University for his extensive contributions to the field of physical therapy and unwavering dedication to his students, colleagues and patients. “Receiving the honorary DSc was the most special moment of my professional career,” Pettman says. “It was made even more special coming from Andrews since this university has been a huge part of my life for over 25 years.” Pettman has worked in the field of physical therapy for more than 40 years and has profoundly impacted Andrews University for over 24 years. National organizations have recognized Pettman for his contribution to the profession with numerous accolades that rank him among the most prestigious lists of recognizable names in the profession of physical therapy. In 1988, Pettman founded the North American Institute of Manual Therapy (NAIOMT), an internationally recognized and esteemed organization whose aim is to teach and develop advanced manual therapy skills to physical therapists within the United States. Currently he serves as NAIOMT’s president, senior faculty member and chief-examiner. In 2003, Andrews University was fortunate to partner with the NAIOMT organization when Pettman agreed to become the clinical director for the Doctor of Science in Physical Therapy program. While unable to be permanently onsite, he has dedicated his presence at Andrews for six to eight weeks each year and has continued to volunteer his time as a mentor to countless Andrews University post-professional students. Pettman has been married to his wife, Maggie, for 45 years. He has three children and five grandchildren.