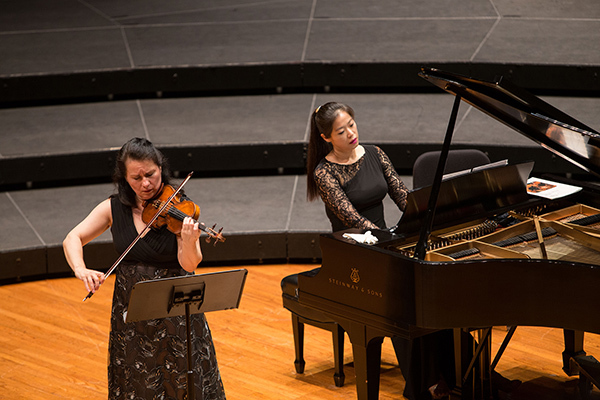 On Sunday, Nov. 11, 2018, at 4 p.m., violinist Carla Trynchuk and pianist Chi Yong Yun will be featured in the Sunday Music Series at the Howard Performing Arts Center on the campus of Andrews University.

Trynchuk and Yun will perform two major works: Beethoven’s “Sonata No. 7 in C Minor, Op. 30, No. 2,” and Franck’s “Sonata in A Major.” Additional selections include “Marguerite (Daisies)” from “Six Songs of Album Leaf” by Sergei Rachmaninoff and transcribed by Fritz Kreisler as well as “Lieder ohne Worte (Song without Words)” by Felix Mendelssohn and transcribed by Misha Elman.

Trynchuk has performed as a soloist with orchestras across North America and Europe, including the Calgary Philharmonic in Canada and the Banatul and Iasi Philharmonic Orchestras. As a recitalist, she has performed throughout Europe, Asia and North America. She graduated from the Julliard School and is currently a professor of music and director of the string program at Andrews University where she was the recipient of the 2000 Faculty Award for Excellence in Research & Creative Activity.

Yun is an assistant professor of music and director of piano studies at Andrews University. The recipient of many honors and awards, she received both her undergraduate and graduate degrees with honors from Jacobs School of Music at Indiana University as a Thompson Star Fellow. She is currently pursuing her Doctor of Musical Arts at University of Illinois Urbana-Champaign. Her performances as a recitalist, collaborative musician and lecturer have taken her throughout the United States, Korea and Europe. Prior to coming to Andrews University, she has held teaching positions at Indiana University, University of Illinois and Illinois Wesleyan University.

No tickets are required for this concert. For additional information, please visit howard.andrews.edu.