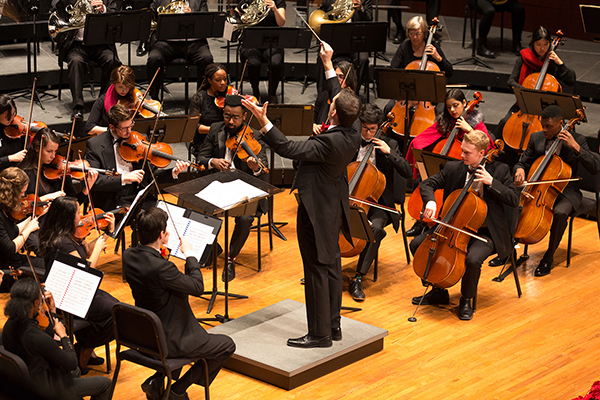 On Saturday, Jan. 26, at 8 p.m., the Andrews University Symphony Orchestra is pleased to continue its annual Young Artists Concert at the Howard Performing Arts Center on the campus of Andrews University. This program will showcase students who have been selected as winners of the Department of Music’s Young Artist Competition.

The Young Artist Competition was a culmination for students of selecting their solos, practicing for multiple months, committing their music to memory and then performing their solos for music faculty. Unsurprisingly, many talented and deserving students auditioned, and it was a difficult process to select only six students to perform their solos with the Symphony Orchestra this month.

Katharina Burghardt will open the concert with a dramatic recitative and aria from Mozart’s opera “Don Giovanni,” singing the role of Donna Elvira. Katharina is completing an undergraduate degree specializing in voice and music education and hails from New York state.

Following intermission, undergraduate pianist Emily Jurek will perform the first movement of Mozart’s divine “Piano Concerto No. 20.” After Emily’s performance, all members of the Andrews University Symphony Orchestra will join forces to perform Johannes Brahms’ celebrative “Academic Festival Overture” under the baton of Edgar Luna Torres, a graduate student in orchestral conducting from Mexico. Brahms composed his overture in 1880 as a musical offering for the University of Breslau (now WrocÅaw, Poland), which had decided to award Brahms an honorary doctorate degree in philosophy.

There are no tickets required for this concert. For more information please visit howard.andrews.edu or call the Howard Box Office at 269-471-3560.