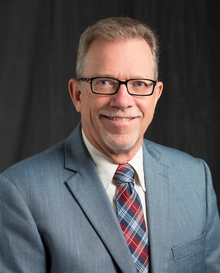 Glenn Russell was born in Egypt to missionary parents and his formative years were spent living in Beirut, Lebanon. He graduated from Columbia Union College, later graduated with a Masters of Divinity degree from the Andrews University Theological Seminary. He earned a Doctor of Ministry degree from Trinity International University with an emphasis on missions and ministry.

He is married to Sharon Russell, a retired reading specialist. They have two adult children and one precious granddaughter Gemma. Dr. Russell spent 10 years pastoring in Virginia and Maryland and then 15 years serving as the Bible teacher at Andrews Academy.

He has authored two books in the secondary Bible curriculum for North America, as well as numerous articles and professional presentations.  He is the host of the media ministry Scriptural Pursuit and has recorded a series of television programs for 3ABN on the gospel according to Matthew. He frequently speaks at academies, universities, camp meetings and youth congresses. One of his passions is missions and he conducts at least two mission trips per year.

His doctoral research focused upon developing missiologically and biblically based short-term missions in the context of long-term missions. He enjoys playing the guitar, playing soccer, and learning about being a global Christian in the more than 20 countries where he has served. Most importantly Glenn Russell is a sinner saved by the marvelous grace of Jesus Christ.

In 2013 Glenn Russell completed his Doctor of Ministry degree at Trinity International University. His specialty focus was Adventist short-term missions.


Glenn Russell has authored two of the secondary religion textbooks and served on the editorial committee for the secondary Bible curriculum for the North American Division of Seventh-day Adventists.