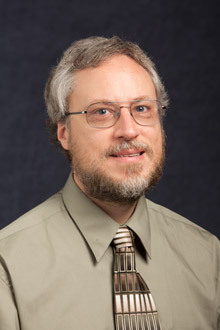 Gary Burdick is professor of physics. He joined the physics faculty in 1999 and was the Assistant Dean for Graduate Programs in the College of Arts and Sciences from 2007 to 2018. Burdick became the Associate Dean for Research and Creative Scholarship in 2010 and then the Dean of Research in 2016.

The unique optical properties of the lanthanide elements in solid state media have found a wide array of important technological uses in the past few years, with much current research progressing in diverse areas such as laser cooling, self-doubling and summing lasers, and the development of new luminescent materials that will be required for mercury-free fluorescent lamps and plasma displays. The work done here develops new methods of calculating and interpreting measured crystal-field energy levels and transition intensities in solid state media--the spectroscopic data necessary for the development of next-generation optical devices incorporating lanthanide elements.