The NMR is a key instrument for determining the structure of molecules.

Supported by the National Science Foundation (NSF), alumni, and the university, in 2001, the department acquired a 400 MHz Fourier Transform NMR.  Our JEOL Eclipse+ spectrometer instrument is equiped with a multinuclear, broadband probe allowing us to measure spectra from nuclei from 15N through 31P along with 19F and 1H. The superconducting magnet is actively shielded and is equipped with an 8 place autosampler as well as an autotune unit. The probe contains gradient shimming coils that improve the speed at which various measurements can be performed.

This type of instrument is available to graduate students at major research universities. At Andrews, the NMR is used in the general chemistry, organic chemistry, instrumental analysis, and biochemistry laboratories, and is a key part of undergraduate research.

The NMR works by placing samples in a magnetic field that is about 200,000 times stronger than the earth’s magnetic field and using radio frequency pulses, in the MHz region, to flip the spin state of magnetic nuclei in molecules.  The splitting patterns, intensities, and chemical shift information can be interpreted to define the structure of molecules. 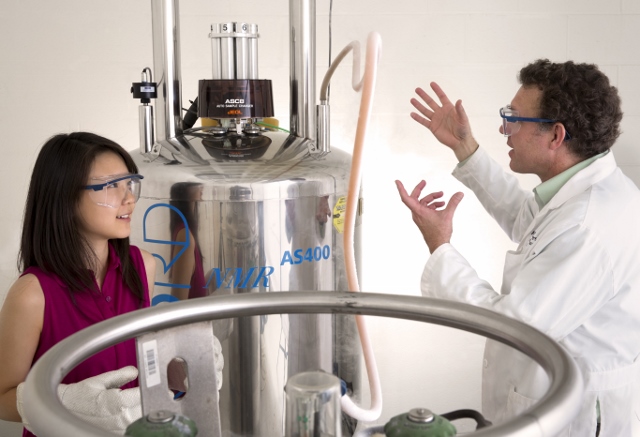 The UV-Vis-NIR (ultraviolet-visible-near infrared) spectrometer is an important instrument that helps students characterize new molecules that are prepared and to determine the amount of compound in a solution.  Simply put, this instrument helps us to measure the color of samples.

Supported by another grant from the NSF, Dr. Murray was able to acquire a research grade Varian Cary-5000 scanning spectrometer that covers the spectral range 185nm - 3300nm.  We use this instrument in various upper division and lower division courses as well as in research.

We also use modern Ocean Optics absorption spectrometers using fiber optic technology in some of our teaching labs.

The Absorption spectrometer works by monitoring the amount of light absorbed at various wavelengths.  Samples absorb light at specific energies (wavelengths) due to electrons moving between orbitals in molecules.  The energy difference between the orbitals gives compounds different colors.

The FTIR is an important instrument that helps scientists understand the parts of a molecule that are present.

Our newly updated Nicolet iS 50 FT-IR spectrometer is capable of resolutions as low as 0.5 cm-1.  The Fourier Transform method relies on computational power and allows multiple spectra to be obtained very quickly.  The FTIR is a key research tool and used in organic chemistry labs.

In 2011, with generous university support, the department acquired a new Varian Cary Eclipse spectrofluorimeter.  The excitation wavelength and emission are individually scanable from 200-950nm.  We were able to include a plate reader that will facilitate analyzing multiple samples in parallel. This unit will be used in Instrumental Analysis (and possibly Physical Chemistry II) as well as research by Dr. Murray and Dr. Hayes.

In 2011, the university supported the purchase of an Agilent High Performance Liquid Chromatography system with a refractive index detector and a photo-diode array detector.  We have been very pleased to begin using this instrument in our courses. 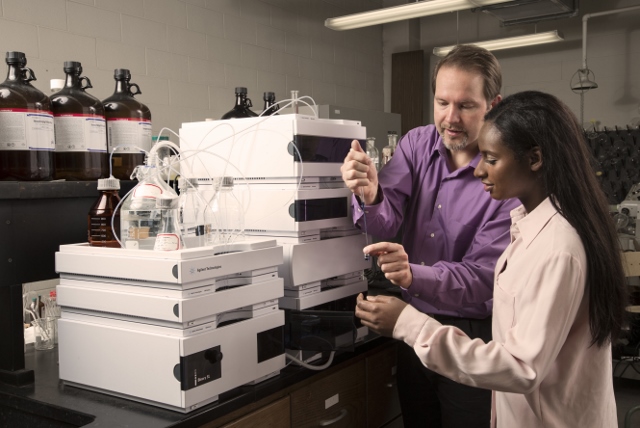 Raman spectroscopy is a complementary tool to IR and is finding increasing use in both qualitative and quantitative sample characterization.  Raman, like IR, works by determining the energy at which molecules vibrate.  The department has a Raman Systems RSI-2001 integrated desktop Raman spectrometer.  The compact fiber-optic excitation and detection sample head is ideal for safe student use.  We have probes available to collect Raman spectra of solid and liquid samples.  Additionally, an immersion probe allows us to measure the spectrum of a sample directly in solution – useful for monitoring reactions. We have used Raman spectroscopy in General Chemistry and Physical Chemistry II labs.

The department has a Continuum Mini-Lite Nd:YAG (neodymium-doped yttrium aluminum garnet) laser that is used in General Chemistry and upper division labs. Doubling, tripling, and quadrupling crystals are available to achieve high power pulses of light at wavelengths from the infrared to ultraviolet regions of the spectrum.  We also have a monochrometer with a CCD camera that can collect Raman spectra.

We have a computer-controlled Cypress potentiostat to measure the current-voltage response of chemical systems.  This can be used to characterize the voltages where compounds lose or gain an electron.  It can also quantitate the amount of substance present.  We use this system in the instrumental analysis lab.

TOF-GC/MS:  Advanced students have access to a gas chromatography - time of flight mass spectrometer housed on campus.  Gas chromatography is able to separate the components of complex mixtures, while mass spectrometery is able to identify the molecular components in the mixture. Time of flight mass analyzers make use of the fact that heavier molecules fly more slowly than lighter molecules that are imparted with a constant amount of energy.

Single Quad-GC/MS:  In the Summer of 2012, the department with university support purchased an Agilent GC-MS  for more undergraduate access.  The mass analyzer is a Single Quadrupole and the system has an isolated GC column. 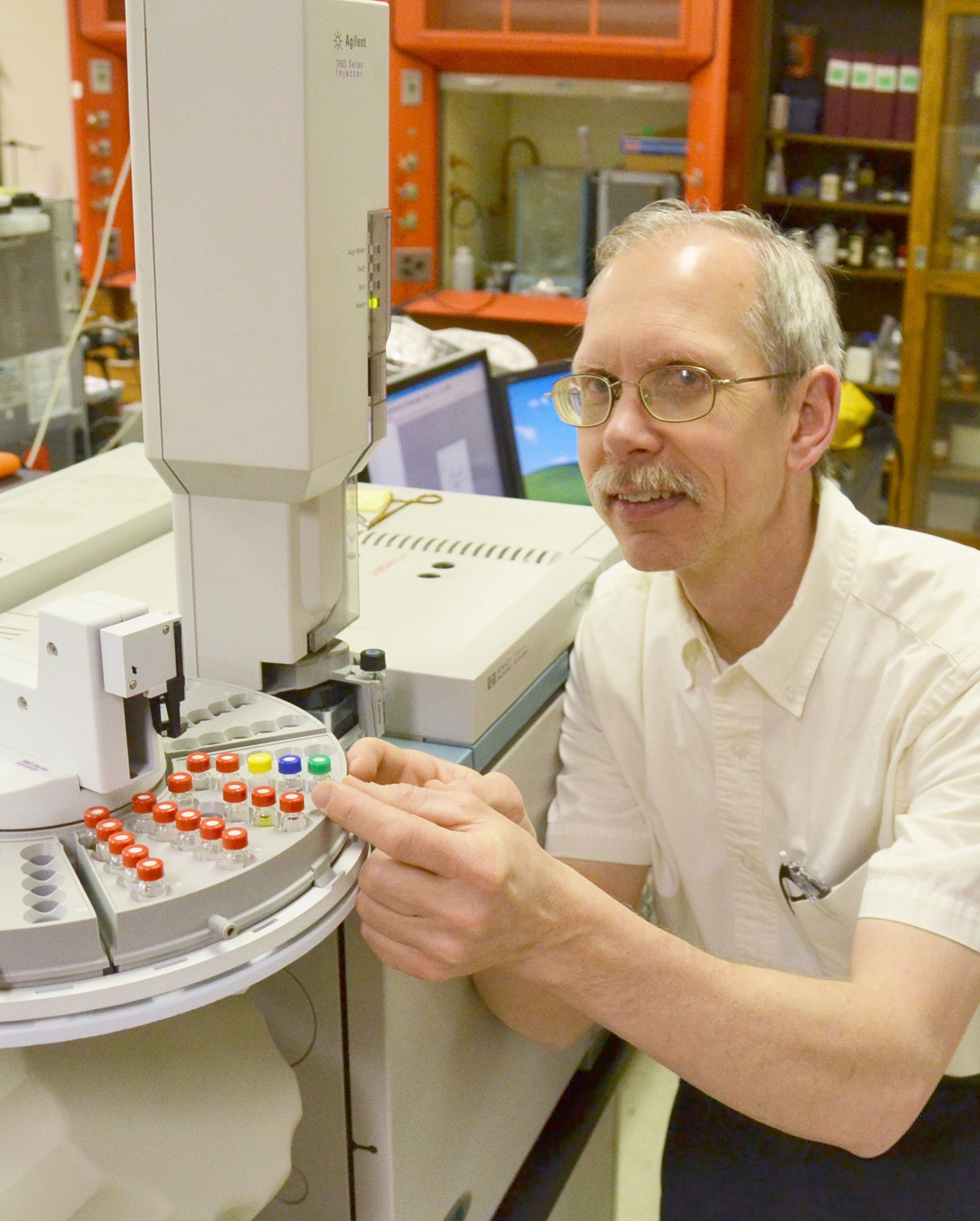 In 2013 we added the Perkin-Elmer Optima 8000 ICP-OES Spectrometer to our instrumentation stock. The ICP-OES uses inductively coupled plasma to produce excited atoms and ions allowing students in our analytical chemistry labs to identify trace elements from the emission of electromagnetic radiation at characteristic wavelengths. 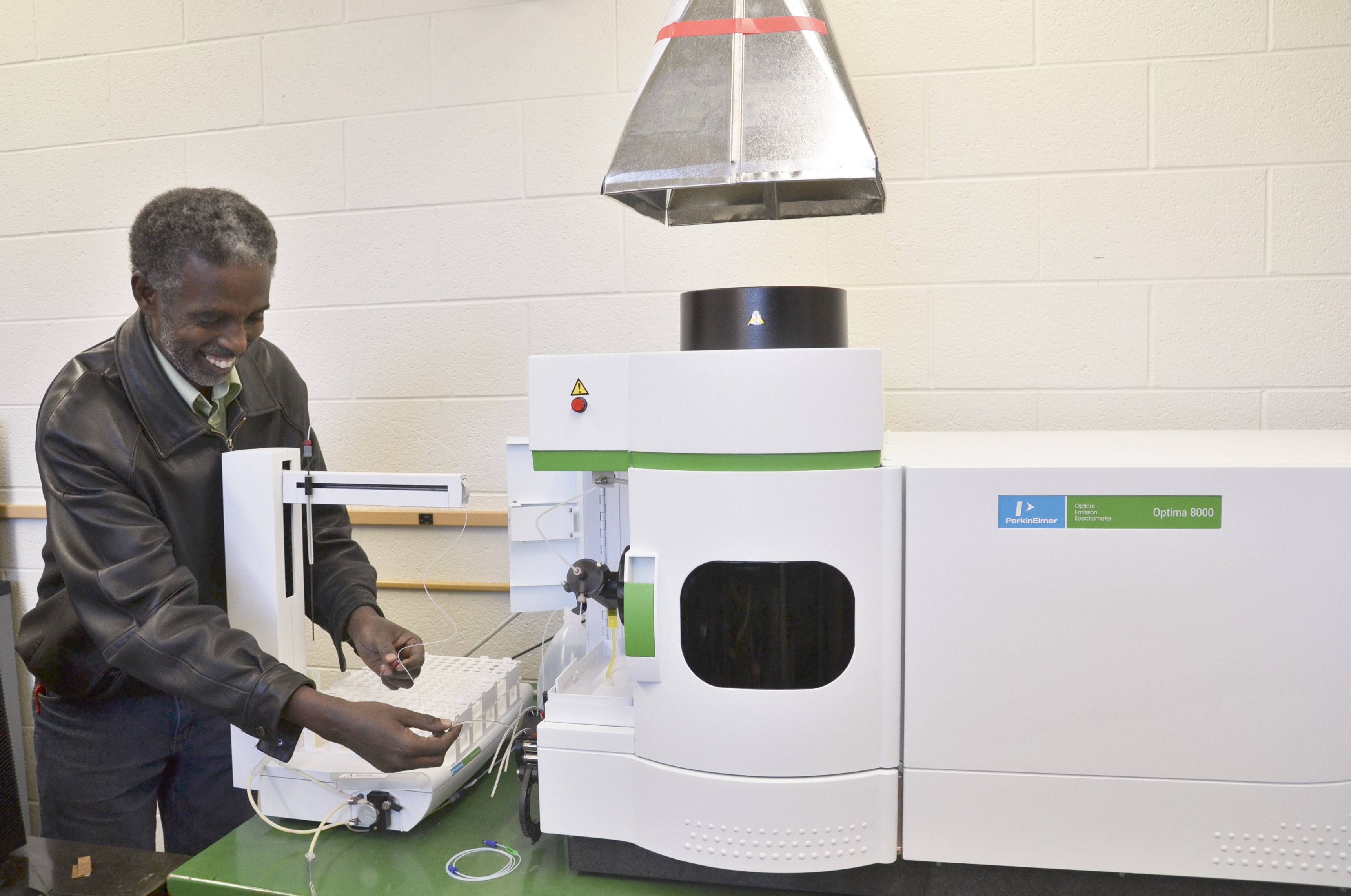