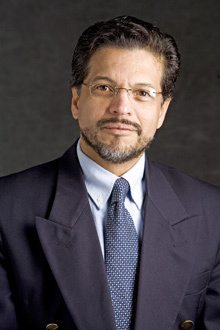 Claudio Gonzalez began his studies in his native Venezuela. Between 1978 and 1981, he continued violin studies at the Royal College of Music in London, receiving a degree in violin performance. In 1992, under the auspices of the Fulbright Foundation of the government of the United States and the Ayacucho Foundation of Venezuela, he studied at the post-graduate level in violin and orchestral conducting at Michigan State University, where he received a Masters degree in Violin Performance in 1994 and a doctoral degree in Orchestral Conducting in 2003.

Claudio Gonzalez participated in many activities that influenced and developed his training. In 1974, he attended the World Orchestra of the International Federation of Young Musicians as a delegate from Venezuela where he had the opportunity of playing under Leonard Bernstein, Michael Tilson-Thomas and Seiji Ozawa. In 1975, under the guidance of Dr. Jose Antonio Abreu, he formed part of the group that founded the National Youth Symphony of Venezuela. At the Royal College of Music, he was part of the Chamber Orchestra of that institution where he had the opportunity of playing under Lorin Maazel and George Solti.