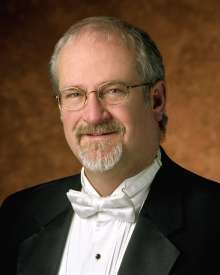 An enthusiastic promoter of community choirs, Zork conducted the South Bend Symphonic Choir – the choir in residence at the University of Indiana South Bend from 2003 – 2008. With a grant from the Council of the Christian Arts he helped establish the Christian Arts Chorale, which he conducted from 2004 - 2010. Concert productions with the Christian Arts Chorale included the opera “I am the Way” featuring Jerome Hines - Metropolitan Opera bassso profundo, and  “Savior” by Gregg Nelson – a modern neoclassical oratorio, presented with the world-renowned Louisiana ballet troupe Ballet Magnificat.  Zork is in his 24th year as director of the Chancel Choir, First Congregational Church of St. Joseph, Michigan.

A frequent vocal recitalist as a lyric baritone, Stephen Zork performs primarily art song and oratorio repertoire. His operatic experience has included the role of the Psychiatrist in the premier of Gian Carlo Menotti’s final opera “The Singing Child” presented at the Mendel Center Main Stage and produced by the Upton Foundation. He sang the role of Philip along side Jesus sung by Jerome Hines in the opera “I Am the Way” composed by Jerome Hines himself, also presented at the Mendel Center. He made his vocal debut in the Michiana area with his portrayal of Noah in Benjamin Britten’s “Noyes Fludde”.

As a composer, Mr. Zork’s opuses include multiple-movement works for brass, woodwinds, choir, and orchestra. His commissions have been presented in numerous recital halls as well as major concert venues including the Howard Performing Arts Center, Morris Civic Auditorium, Mendel Center, the Myerson Performing Arts Center and the Georgia Dome. His orchestrations and choral arrangements appear in 14 published compact disk albums.

Stephen Zork’s two most influential voice teachers were the late Horst Günter of the New England Conservatory of Music and Margaret Harshaw of the Indiana University Jacobs School of Music, Bloomington.  The choral conductors who have most inspired him, and under whom he has studied and sung, are the late Eric Ericson, the late Robert Shaw, Gregg Smith, Dale Warland, Richard Sparks, and Jon Robertson. His formative musical training was received through London’s Royal Academy of Music – Bulawayo, Helderberg College Academy – Somerset West, Atlantic Union College – South Lancaster, and Pacific Lutheran University – Tacoma. He holds memberships in the American Choral Director’s Association and IAMA.