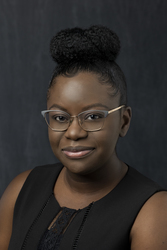 Cristy joined the MLS faculty in July of 2021. She was born in The Bahamas and lived there exclusively until her family moved to New York in 2008. Cristy began her journey at Andrews University in 2009 seeking a Biology Pre-Medical degree. She later learned about Medical Laboratory Sciences and felt that it provided more clinical knowledge and job security. Cristy graduated with a Bachelor of Science in Medical Laboratory Science from Andrews University in 2013.

After working for a year as an MLS, she attended the University of the West Indies where she completed a Medical Degree (MBBS) in 2019, after which she served as a junior physician in the Bahamas. Cristy's experience as an MLS includes work as a medical technologist in Michigan, MidMichigan Medical Center – Alpena (then, Alpena Regional Medical Center); Virginia, Mary Washington Hospital, and The Bahamas Kelso Medical Laboratory.

Cristy is married to Alvarico and they have one daughter named Alaina.