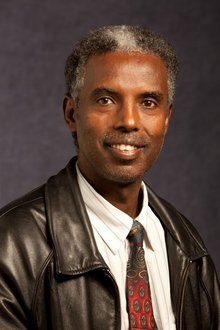 Getahun Merga is associate professor of chemistry on the campus of Andrews University, Berrien Springs, Mich. He joined the faculty in 2002.

Born in Shoa, Ethiopia, Merga graduated from Addis Ababa University, Ethiopia, in 1984 with a BS in chemistry. He then went on to the University of Pune, India. In 1991, he earned a master's of science and in 1995 he received his PhD. The title of his doctoral dissertation is "Structure Reactivity Studies of Some Halobenzenes and Halotomenes: A Radiation Chemical Study."

While working towards his degrees, Merga received the DAAD Fellowship from Max-Planck-Institute for Strahlenchemie, Muelheim un der Ruhr, Germany. He was also the recipient of the Indian Young Scientist Award.

Prior to assuming his position at Andrews, Merga was the department head and professor of chemistry at Solusi University, Bulawayo, Zimbabwe, for five years. He also served as teacher and education director for the SDA schools in Akaki, Ethiopia, from 1986-1989 and again from 1995-1996.

Merga's high involvement and knowledge in the area of chemistry has earned him a place in the Chemical Society of Ethiopia.

In 1996, Merga wrote two articles for the Journal of the Chemical Society, Perkin Transactions 1. The titles of his articles were: "Oxidation of Benzyl Radical by Fe(CN)-6-" and "OH Radical Induced Oxidation of Chlorobenzene in ag. Solution in O2 or Absence of O2." In 1994 he was published in the Journal of Physical Chemistry.

He is married to Tringo Dessie. They have two daughters and one son.