The engineering program (BSE) is accredited by the Engineering Accreditation Commission of ABET, www.abet.org. 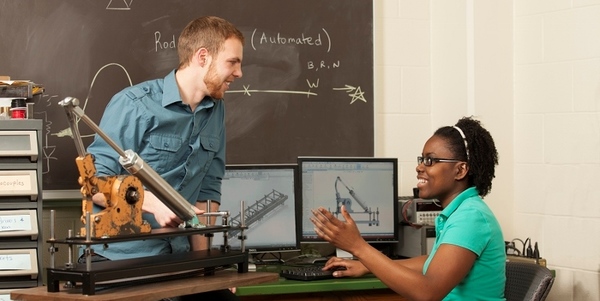 Andrews University has always been at the forefront of computing programs, offering opportunities that you'd be hard pressed to find anywhere else. 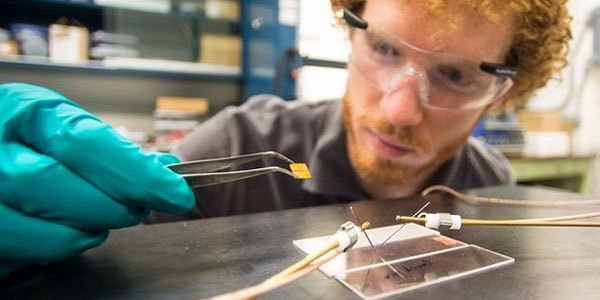 Did you know that engineering is one of the most lucrative fields on the market today, according to the U.S. Bureau of Labor Statistics? 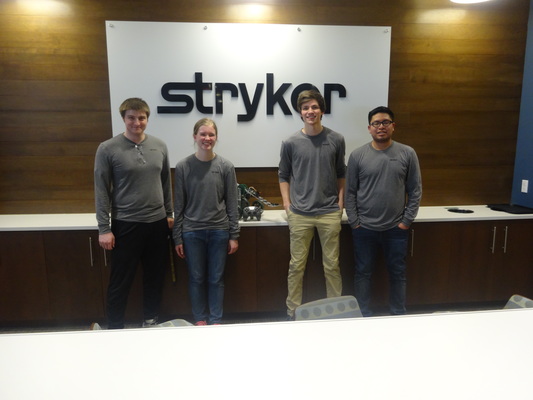 March 21-22, 2019, the University Recruiting department at Stryker Medical in Kalamazoo held the 9th annual Stryker Engineering Challenge. Teams of four sophomore engineering students compete against each other for an opportunity to get a $1000 scholarship and an interview for a Stryker Internship position for summer 2020. MCA has been invited to send a team to the competition since 2015.
The challenge began around 7pm on Thursday and all work ended at 1:45pm on Friday. The competition part of the challenge began at 2:30pm. The teams had to leave the building from 2am to 6am on Friday, but Stryker had motel rooms reserved for all teams at a local Hampton Inn.
The main part of the challenge was to design a remotely controlled vehicle from a supplied build kit. This vehicle was used in a 30 minute pick-up Lego people competition where all teams work at the same time, and in an obstacle course race where two-three teams raced at a time to see who could complete the course with the fastest time. Each team has to use three different drivers during the race.
In addition to the competition, the teams could collect points on technical challenges before the competition and on homework that was collected around noon on Friday.
The MCA team was second overall after the homework and technical challenges, trailing Michigan State by 13 points. During the picking-up Lego people, MCA took the lead and was 24 points ahead of Michigan Tech before the race. Western won the race followed by Michigan Tech and MCA, resulting in MCA winning the challenge overall by a single point over Michigan Tech.
The MCA team worked really well together and maximized their performance by working well together and making good design decisions.
Close 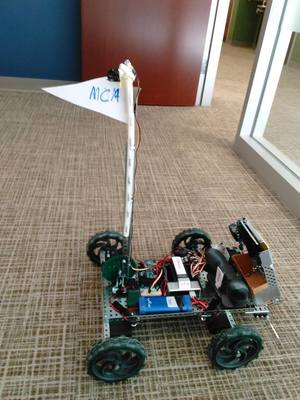 This year there were six teams:

The event started March 22 around 3 p.m. with a tour of some of the Sryker's facilities followed by a product demo.  At 6 p.m. the teams were served dinner, and while they were eating, a panel of Stryker engineers answered questions the students had submitted during the tour.

The engineering challenge started around 7 p.m. when the teams were asked to build a tower from toothpicks and marshmallows.  There were also technical challenge questions and homework that could be submitted for points before the vehicle competition began.

The main event was to design and construct a remotely controlled vehicle.  The vehicle had to traverse an obstacle course, find and pick up Lego figures and bring these figures back to their pit area.  Only figures brought back to the pit area counted for points.

Stryker employees had constructed models of several downtown Kalamazoo buildings grouped in three areas accessible through an obstacle -type course form each team's assigned pit area.  Spread out in the building areas were small Lego figures with magnets glued to one side.  Some Lego figures were easily accessibe in the open, while some were hidden behind closed doors.  Most doors were opened by shining a light at a light sensor.  The Lego figures were assigned points according to how difficult they were to pick up.  Each team had an opportunity to transport a VIP Lego figure - if the figure was transported within an assigned three-minute window, 20 points were awarded.

The vehicle competition had two parts.  Part one involved 20 minutes of picking up Lego figures.  Part two was a time trial obstacle course race where each team had to use three different drivers.

Michigan Tech had a clear lead after the technical challenges and the homework and was followed by Miami and Purdue.  MCA shared fourth place with Western.

Gunnar Lovhoiden, a professor of engineering at Andrews University, supported Andrews students at the competition.  He says, "I think our team worked really well together.  Their design worked well and they represented MCA with honor.  Second place - how about that!"

-This article was writting by Gunnar Lovhoiden, professor of Engineering. 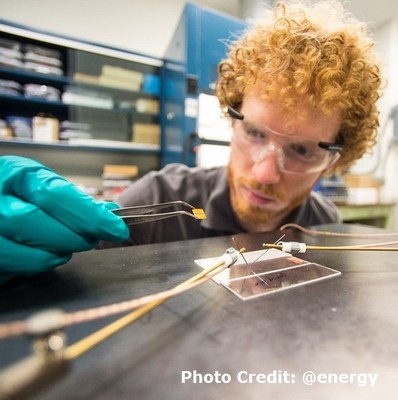 Thomas Zirkle, our recent alumni and graduate student at Notre Dame, received the NSF GRFP fellowship grant last year and recently was the recipient of the 2017-2018 STEM Chateaubriand Fellowship. We look forward to hearing about his experiences, when he returns from France.