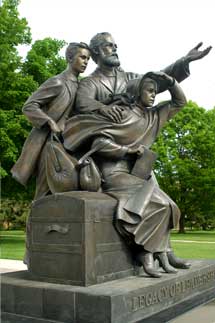 Andrews University enrolls more than 3,500 students annually from most of the 50 states and nearly 100 countries and territories around the world. Several thousand additional students study at off-campus locations both nationally and abroad. U.S. News and World Report ranks Andrews in the top ten universities in the nation in terms of campus diversity and proportion of international students. Andrews has more than 80,000 alumni worldwide.

Andrews University was established more than a century ago, in 1874, as Battle Creek College in Battle Creek, Michigan. It offered a collegiate program with literature, languages, science, mathematics, teacher training and theology.

The founders, visionaries of the young Seventh-day Adventist denomination, believed they should use every avenue to spread the gospel and serve the world, including higher education. Although the young institution experienced difficult times and challenges, it also flourished, and by the mid 1890s the enrollment had risen to more than 700 students.

On the brink of a new century, seeking room for expansion and a fresh start, the school moved in 1901 to a beautiful site near the banks of the St. Joseph River in Berrien Springs and was renamed Emmanuel Missionary College.

From woods and farmland on which faculty and students built three wooden frame buildings to hold their new school, the campus has grown to a property of 2,400 acres and a complex of academic buildings, residence halls, apartments and service buildings.

The vision blossomed still further when, in 1959, the Seventh-day Adventist Theological Seminary and a school of graduate studies, together known as Potomac University in Washington, D.C., were moved to the campus of Emmanuel Missionary College.

The following year the three entities united under one charter bearing the name Andrews University—with an integrated board of trustees, administration and faculty. The name honors John Nevins Andrews (1829−83), pioneer Adventist theologian and scholar and the denomination’s first official missionary to serve outside North America.

The present organizational structure of the School of Graduate Studies was adopted in 1987. It oversees graduate programs and research activities campus-wide.

Griggs University joined Andrews in 2011 to become the School of Distance Education. It extends access to Adventist education beyond campus, community and national boundaries. It supports all schools in delivery of degrees at national and international locations, while also promoting and modeling best practices in distance education.

Andrews University, established by visionaries, in the spirit of Adventist educational philosophy, and enriched by a diverse faculty and student body, now offers a wealth of choices to prepare its graduates for life in the 21st century. The mission, however, remains the same—to serve God and humankind.