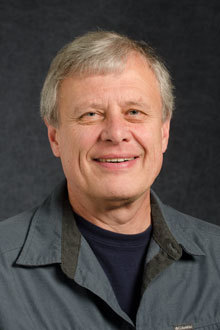 Jim Hayward received his Ph.D. in zoology from Washington State
University. He has investigated the communication, habitat
selection and reproductive success of gulls. He co-directs the
interdisciplinary Seabird Ecology Team, which develops mathematical
models to forecast the behavioral ecology of marine animals. He also
experimentally evaluates physical and chemical processes that promote
eggshell fossilization in avian and non-avian dinosaurs. Hayward's
research has been funded by grants from Sigma Xi, The American Museum of
Natural History, Andrews University, and the National Science Foundation.

My research interests range from community ecology and paleoecology to
the history of science.

Since the early 1970s, I have been interested in the behavioral ecology
of seabirds, bald eagles, and harbor seals in Washington State.
Currently, as co-director of the Seabird Ecology Team, my research is
centered at Protection Island National Wildlife Refuge in the Strait of
Juan de Fuca, Washington. Our team is developing mathematical models
that make accurate, long-range predictions of the habitat occupancy and
behavioral dynamics of seabirds and harbor seals. We also are examining
the feeding ecology of bald eagles. Our research is funded by grants
from the National Science Foundation.

In 1980, the ring-billed and California gull nests and eggs I was
studying in eastern Washington were completely buried by Mount St.
Helen's ash. One year later, I found entire nests and eggs preserved
beneath the ash. This led to my interest in the fossilization of bird
(avian dinosaur!) and non-avian dinosaur eggs.

I enjoy reading, writing, walking, backpacking, and exploring natural
areas, especially the mountains and islands of the Pacific Northwest and
the sand dunes of Lake Michigan.