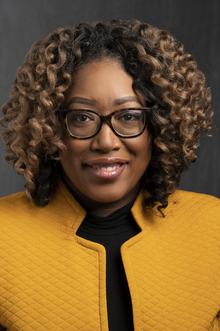 Dean Hunter graduated from Andrews University with a BS in Psychology and also earned a Masters of Education in Clinical Mental Health Counseling with an emphasis in Career Counseling & Diversity from University of Missouri St. Louis.

Dean Hunter was born into a Caribbean-American family and grew up in Chicago, Illinois. As a pre-teen she moved to Berrien Springs and attended high school at Andrews Academy. From early childhood Dean Hunter has had a heart for people and a passion for music ministry. One of her proudest experiences was having the honor of serving as a member and later Director of The AU Deliverance Mass Choir. After graduating from Andrews in 2006 she knew that she wanted to pursue a professional career in Higher Education. For over 10 years she’s served and cared for students on a variety of college campuses in counseling and mentoring, as well as instructional and supportive roles. She’s also served her community as an educator, speaker, Career & Life Coach. In 2010 she married the love of her life, Claval Hunter, who is also a graduate from Andrews University. As a pastor’s wife, travelling became her middle name and she loves it! She also enjoys cooking and trying new foods. One of her most rewarding jobs is being a mommy to her beautiful children.