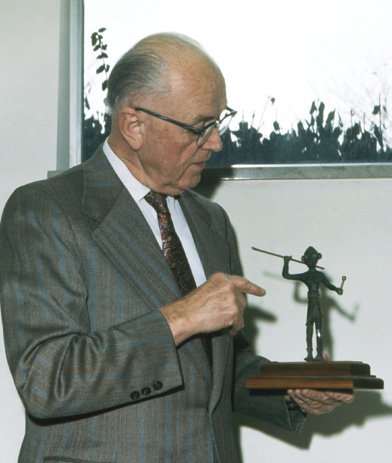 Siegfried H. Horn was the premier biblical archaeology professor, with many of the projects begun under his leadership still continuing to produce fruitful results today. Horn was the embodiment of a life dedicated to scholarship, and he influenced every major contemporary Seventh-day Adventist theologian and biblical scholar in addition to significantly impacting the larger world of Old Testament scholarship and Biblical Archaeology.

Horn was the child of a Bible teacher and one of Germany’s earliest aviators. From his mother, he learned a love of the bible, history, and archaeology; his father imparted to him a love of travel and adventure. After beginning his theological studies in Germany and England, Horn went to the Dutch East Indies as a missionary. During World War II, he was imprisoned with other Germans first in Java and then India. In his seven years in internment camps, he followed a rigorous schedule of study, as well as teaching Greek, Hebrew and Bible classes to his fellow detainees.

He and his books survived the internment camp, and in 1947 he came to Walla Walla College in Washington where he received a BA. He then studied for an MA from the Seventh- day Adventist Theological Seminary, then in Washington, D.C., and went on to earn a PhD in Egyptology from the Oriental Institute.

He began teaching at the Seminary in 1951, and remained there until his retirement in 1976. While teaching, he became actively involved with excavations at Shechem from 1960–1964. This inspired him to institute and direct excavations at Heshbon in 1968.

He began publishing the journal Andrews University Seminary Studies in 1963, and the journal became a forum for theological research in all disciplines.

Early in his career, Horn began to collect artifacts from his excavations and bring them to his classes. The early collection fit into one cabinet, but his efforts expanded into the Horn Archaeological Museum, which now houses one of the largest cuneiform collections in the United States.

In the early 1970s, Horn became the first director of the ThD program. Through his guidance, doctoral work in the Seminary was emphasized and strengthened. Even after retirement, Horn continued to lead a prolific scholarly life. In the ten years following his retirement, he published 12 books and 57 articles, and continued to teach seminars world- wide as a visiting professor. Horn’s legacy continues today with the work of his students, and his students’ students in the field of biblical archaeology. The guidelines under which he worked have been established as the “Andrews Way” of doing archaeology1—guidelines still followed by workers in biblical archaeology:

1 Randall W. Younker. "Integrating faith, the bible, and archaeology: A review of the 'Andrews University Way' of Doing Archaeology," in J.K. Hoffmeier and A.R. Millard (eds.), The Future of Biblical Archaeology: Reassessing Methodologies and Assumptions (Wm. B. Eeardmans, 2004), p. 43.