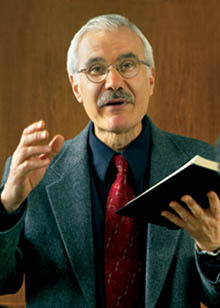 S. Joseph Kidder, born in biblical Nineveh (today’s Iraq) joined the department of Christian Ministry of the Seventh-day Adventist Theological Seminary in 2000, quickly establishing himself as a highly respected professor and voluminous writer specializing in the areas of church and spiritual growth, evangelism and pastoral leadership.

Joe’s 16 years of pastoral ministry, having served from 1984 to 2000 in Washington State have informed his nine books and his countless articles written during the past 35 years. His thoughtful research has been translated into Croatian, Chinese, French, German, Japanese, Portuguese, Romanian and Spanish, testifying to the universality of the principles found within his writings.

Joe has been known for many things during his two decades of service at the Seminary, but perhaps most notable are his daily walks around campus. He rarely walks alone, and welcomes the company of seminarians and fellow faculty members. Their conversations don’t contain idle talk; rather, Joe spends time ministering to the person with whom he walks, praying with them about challenges faced in that person’s life.

In recognition of his significant research contributions, the Seventh-day Adventist Theological Seminary is proud to congratulate him on receiving this prestigious award.